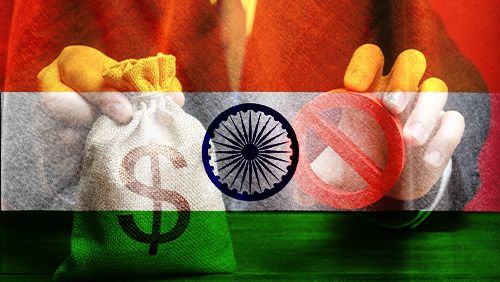 Indian authorities continue to crack down on gambling operations they fear are originating out of China. 15 different locations have been raided, and Chinese national are accused of running both illegal gambling and online dating rings.

The Times of India reports the Enforcement Directorate also seized Rs 47 crore (approximately $6.38 million) from HSBC Bank accounts tied to the operations. Raids were conducted in Delhi, Gurgaon, Mumbai and Pune on August 28. The entire network is suspected to have collected as much as Rs 1,300 crore ($176 million) from Indians.

The investigation began because the ED noticed payment gateways were failing to report suspicious transactions. “There is a suspicion that, apart from indulging in banned activities like online betting, this network of companies with their reliance on online wallets and their lax regulatory systems could have been used for hawala transactions as well. The ED is in the process of obtaining information from online wallet companies, HSBC Bank, Registrar of Companies etc,” the ED announced.

“With the help of Indian chartered accountants, some Chinese nationals floated multiple Indian companies, initially kept dummy Indian directors to incorporate the companies and later replaced them with Chinese nationals who travelled to India for this purpose,” they added.

While the Indians who participated in the operation likely weren’t duped into it, as the ED implies, the focus recently has been on going after the Chinese bosses behind these operations, either out of a puritanical drive, a protection of local capital or a fear of espionage.

In mid-August, reports surfaced that China could be using online gambling as a data mining operation to learn about their neighbor. Authorities noticed an increased drive from Chinese gambling operators to sign up new Indian customers around the same time border frictions increased. Authorities alleged that local law enforcement were bribed to turn a blind eye, while apps could have been used to help China’s border aggressions.

But China doesn’t want to get caught on the other side of the equation. The country has turned to Internet Service Providers (ISPs), asking them to ban any online gambling advertising that could slip through to children now learning online.