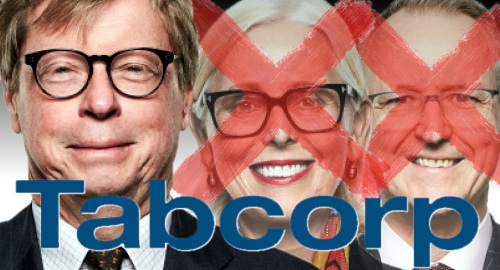 On Thursday, Tabcorp filed papers with the Australian Stock Exchange announcing a plan to replace its current chairperson Paula Dwyer with Steven Gregg (pictured left), a Tabcorp non-executive director since 2012. Dwyer plans to step down on December 31.

Tabcorp also said CEO David Attenborough would follow Dwyer out the door sometime in the first half of 2021, although the company is still conducting the global search to identify the individual that will fill Attenborough’s corner office.

Dwyer said that with the company’s tortured integration of rival Tatts Group nearly finished, “the time is now right for a new chairman to lead” Tabcorp into the future. Similarly, Attenborough cited the near-completion of the Tabcorp-Tatts combo as providing the signal that it was time for him to push on.

However, the Sydney Morning Herald reported that the two execs were effectively herded toward the exits by a group of ‘influential shareholders,’ including Perpetual Ltd, Pendal Group and Investors Mutual, who apparently felt the company was floundering under its current leadership.

The shareholders in question are said to have sent Tabcorp’s board a letter calling for both Dwyer and Attenborough’s heads, claiming that fresh leadership was needed to pull the company out of its malaise.

Among the grievances that loomed largest in the letter were concerns over the company’s inability to realize the ‘synergies’ promised from the Tatts takeover. The cost of fusing the two companies – particularly their respective wagering brands – bears no resemblance to projections made at the time the deal was struck.

Investors appeared to support the investors’ coup d’etat, as Tabcorp’s shares closed Thursday’s trading up nearly 5% to AU$3.62, although that’s still significantly below the AU$4.75 peak the stock hit in January.