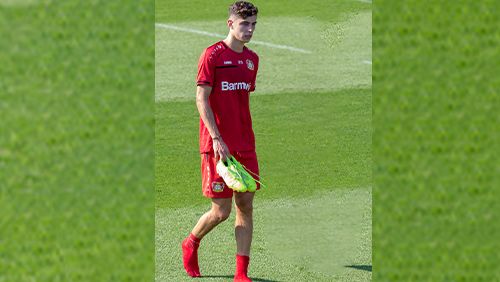 Chelsea continue to get the jump on their English Premier League rivals with reports that Kai Harvertz is poised to join Frank Lampard’s side in London.

The Bayer Leverkusen international remains one of the most saught after soccer stars in Europe, with the likes of Real Madrid and Bayern Munich showing interest in the 21-year-old German international. Chelsea have emerged as the only side to have the financial muscle to pull off the deal, with the Blues expected to table an offer of £63m, with add-ons taking the price up to £90m .

Harvertz has been in stunning form for Leverkusen this season, netting 17 goals and eight assists across all competitions. Reports have emerged from German media that Harvetz has agreed to personal terms with Chelsea, and will push the German club to seal the transfer. Leverkusen’s failure to qualify for the Champions League was enough to convince Harvertz to search for greener pastures.

Update @kaihavertz29 & @ChelseaFC: When the training starts again at Bayer Leverkusen on thursday, Havertz wants to talk with his club. his request: the Bosses should let him go to Chelsea @SPORTBILD @AxelHesse1

Chelsea bosses see Harvetz as a potential replacement for Eden Hazard. The Blues have been busy in the transfer market, securing midfielder Hakim Ziyech from Ajax before nabbing star striker Timo Werner from RB Leipzig for £45m.

The spending is expected to continue for Frank Lampard’s side with a potential move for Atalanta left-back Robin Gosens after being priced out of a move for Ben Chilwell. The Blues have been strongly linked to West Ham’s Declan Rice and Atletico Madrid stopper Jan Oblak. Chelsea will look to offload Kepa Arrizabalaga to finance a deal for Oblak’s £110million release clause.

Liverpool will be receiving the Premier League trophy for the first time in 30 years at the end of their match with Chelsea at Anfield. Manchester United and Leicester remain in contention for a top-four spot. The two clubs will go head-to-head on the final day of the competition later this week.