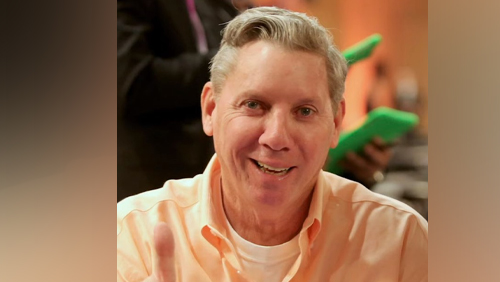 In an industry where award shows can often feel like the afterparty to players winning seven-figure scores at the felt, there are few major honours worth having outside winning poker tournaments. Poker players can be inducted into the Poker Hall of Fame when they turn 40 – and not before – but perhaps the best honour of all is having your name on the trophy itself.

Think of the Chip Reese Trophy, the famous work of art awarded to whichever player takes down the Poker Players Championship in Las Vegas – or online this year – at the World Series of Poker.

Well, from next season, the World Poker Tour Main Event trophy will bear the name of one of the WPT’s most famous sons – poker legend and current partypoker Chairman, Mike Sexton.

The man himself was delighted to read that the famous cup he won himself in Canada just a few years ago will bear his name.

I was totally thrilled winning a WPT title & just getting my name engraved on the WPT Champions Cup. I truly didn’t think anything in poker could ever top being inducted into the Poker HOF, but to me, this does. “Thank you” WPT for this incredible honor. #wpt https://t.co/Mij0too7MW

The WPT Champions Cup is an absolute beast of a trophy. Formed into a giant cup, there are numerous plaques on board with the names of their winners engraved onto them. So far, so prestigious, but add in diamond studs drilled into the corners for multiple winners and it is a trophy that even to hold feels special. We know, we’ve done it. You can almost feel poker history in your fingers.

Next season, we’ll look forward to referring to the famous trophy as the Mike Sexton WPT Champions Cup.

It’s a superb honour for the man himself and one that the World Poker Tour were delighted to announce on their site, saying:

“The WPT Family is proud to bestow this tribute and privilege to the greatest poker ambassador the world has ever known,” said Adam Pliska, the Chief Executive Officer of the WPT. “Mike Sexton embodies everything the World Poker Tour stands for. His class at the table, humility towards fans of the game, travel to all corners of the globe, and his contributions away from the table have all benefited the game we love. In accordance with his incredible work for the World Poker Tour and the entire poker community, I can think of no better way to honor Mike’s legacy than to award the WPT Champions Cup in his name.”

It’s impossible to disagree with Pliska, with the lovable Mike Sexton the perfect person to honour in this way. We can’t think of anyone better to represent the world-famous poker brand, as not only has Sexton won a WPT Main Event, but he was the longest-serving presenter alongside Vince Van Patten, co-presenting some of the best poker action in the world from 2002 until his switch to partypoker just a few short years ago.

Sexton represents not only the past, having been a good friend of many of the older players in the game along with legendary icons of the game like the late Stu Ungar, but the future too. As partypoker Chairman, he’s pushed new and innovative methods of bringing poker to a whole new audience in a big way, and with the recent partnership between two of the biggest brands in poker, partypoker have hosted the WPT Online Championships.

With just shy of 300 winners chiseled into the famous trophy, Sexton himself is honoured.

“I was thrilled to get my name on the WPT Champions Cup in Montreal in 2016,” he told the WPT. “In 15 seasons in the WPT commentator booth, I can attest first-hand how difficult it is to win a WPT Main Event. I thought being inducted into the Poker Hall of Fame would be the greatest moment of my career, but to have the WPT Champions Cup named in my honor and be part of the experience for all WPT champions moving forward is truly the highest peak in my 40 years in poker. Thank you to the World Poker Tour for this humbling distinction.”

With five more players set to add their names to the canon of greatness on the trophy that will now forever be known as the Mike Sexton WPT Champions Cup by playing in the WPT World Online Championships on partypoker this summer, Sexton’s superb poker catchphrase, ‘May all your cards be live and may all your pots be monsters!’ will live as long as the iconic trophy that now bears the poker legend’s name.