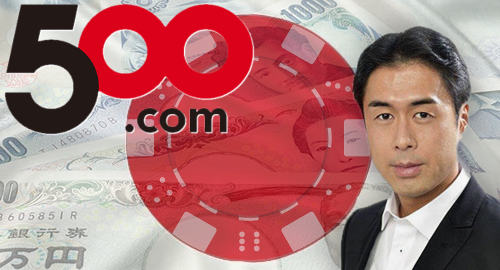 On Tuesday, Japanese media reported that a second member of Prime Minister Shinzo Abe’s Liberal Democratic Party (LDP) had admitted receiving cash and favors from 500.com during a visit to the company’s Shenzhen headquarters and later to a Macau casino as 500.com’s guest.

Takaki Shirasuka admitted accepting ¥1m (US$9,300) in cash as well as allowing 500.com to buy his gambling chips at the unspecified casino. Shirasuka’s office issued a statement saying that the lawmaker believed “none of his actions constitute anything illegal.”

Incredibly, public prosecutors don’t intend to file criminal charges against Shirasuka (pictured), based on their view that, while he was a member of a cross-party group of legislators promoting Japan’s push to establish a domestic casino industry, he had no influence over which companies will receive the three initial licenses up for grabs.

500.com, which formerly operated a China-approved online lottery platform and currently operates a struggling online casino site, had expressed an urge to get into the land-based gambling industry via Japan to shore up its rapidly diminishing revenue streams.

But on Christmas Day 2019, Japanese prosecutors indicted another lawmaker, Tsukasa Akimoto, for accepting bribes from 500.com. Unlike Shirasuka, Akimoto was a cabinet official with more influence over the casino licensing process. Akimoto and Shirasuka were on the same 500.com-sponsored trip in 2017.

Last month, the Nasdaq-listed 500.com reported revenue of just US$400k in the first quarter of 2020, resulting in a net loss of $5.2m. The company has been bleeding red ink for years now and its cash reserves shrunk to just $47m by the end of March.

500.com released its FY19 results in February but the company has yet to file its official annual report, despite receiving a two-week extension from the US Securities and Exchange Commission. The company blamed the delay in part on the internal investigation it launched in January following the Japanese bribery brouhaha.

Last week, 500.com announced that the New York Stock Exchange had informed the company that it wasn’t in compliance with its listing requirements. The NYSE has put the company on notice that, should it fail to file the report within the next six months, “suspension and delisting procedures will generally commence.”