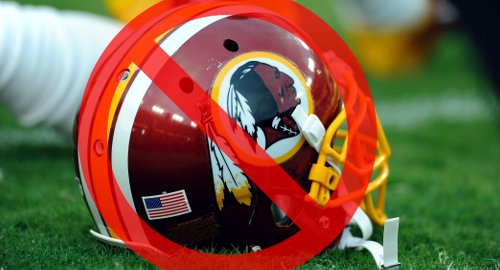 On Monday, the Redskins’ corporate office issued a statement saying that it would be “retiring the Redskins name and logo upon completion” of the internal review it announced earlier this month. The team’s identity has long been the subject of protest by US tribal activists who viewed the name as racially offensive.

The National Football League franchise said it was in the process of developing “a new name and design approach that will enhance the standing of our proud, tradition rich franchise and inspire our sponsors, fans and community for the next 100 years.”

There’s no indication as to what the team’s new identity might be, nor if it will be in place by the time the new NFL season kicks off (hopefully) in September. Owner Daniel Snyder, who previously vowed that the team would “NEVER” bow to pressure to change the name, is said to be “working closely” with other stakeholders in choosing a new identity.

Objection to the continued use of the Redskins name by the team’s corporate sponsors appears to have been the tipping point in convincing the team’s ownership to agree to a rebrand. FedEx, which has a stadium naming rights deal with the team, publicly asked the team to rethink its identity, while Nike and Amazon brought further pressure by purging Redskins-branded merch from their online marketplaces.

Following the FedEx statement, several individuals holding significant ownership stakes in the team reportedly began shopping around for someone to buy them out. Apparently, the cachet associated with owning a piece of an NFL franchise was no longer worth being on the receiving end of a rising chorus of public complaints to get with the times.

The Atlanta Braves baseball club has told fans that it’s sticking with its current identity but the use of the ‘tomahawk chop’ by the team’s fans is “one of the many issues that we are working through” with a “a Native American Working Group with a diverse collection of other tribal leaders.”