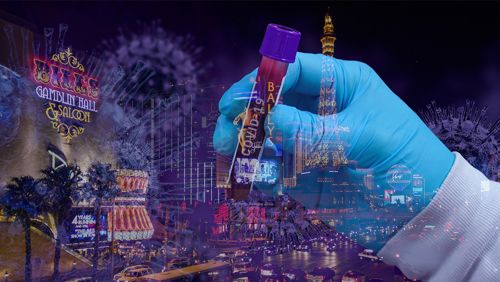 After a long wait, many Las Vegas cardrooms have reopened. Earlier this week, popular YouTube poker content maker Joey Ingram made a video all about how he risked his life to sit down in a cash game with very few face-masks in sight.

It’s a brave/stupid new live poker world depending on where you sit on the debate’s two sides. Either going out to play poker and risk catching COVID-19 is crazy to you, or you’re willing to do so to maintain your mental health. It’s the health equivalent of chasing flush draws, it’s just what you’re going to catch on the river that’s changed.

The re-opening of the HyperX Esports Arena isn’t just for more traditional Esports, with poker tournaments lined up since January to take place at the stunning Vegas-based studio space.

When the World Poker Tour decided to delay their national final tables when six players were reached before rescheduling final tables at the HyperX Esports Arena, many – including ourselves – commended them on growing the prestige of the events in question.

When the Luxor Hotel & Casino re-opens on June 25th, so too will the HyperX Esports Arena. But will there be any players sitting down?

Tournament Directing poker legend Matt Savage told Card Player earlier this week that, “It is only very recently that Las Vegas has reopened its doors. We are having discussions daily regarding the final tables and will share our plans with our final table players and our fans at the appropriate time.”

When that time will be is anyone’s guess because also on Card Player was an article revealing that Las Vegas Strip workers have been diagnosed as having COVID-19.

Finding a balance between opening too late to miss out on vital business and too soon not to endanger the lives of your players is a horrific tightrope act that every casino in Las Vegas is walking at present.

With three tables already to reschedule, the WPT face a difficult decision in deciding when to do so. There is the Tournament of Champions to consider, which every WPT Main Event winner will be eligible to play, along with previous champions from past WPT Main Events. With the WPT Gardens Poker Championship, Borgata Winter Poker Open and L.A. Poker Classic all waiting to resume, it’s not easy.

The safety measures announced on the venue’s website is not a set of rules and regulations that seems even close to being applicable to a poker tournament, with six feet of separation required. Sure, there are only six people left in each event, but if they have to throw their cards into the muck from the cash-in desk, it takes a lot away from the intimate television production the events were originally hoped to be.

With the WPT Gardens Poker Championship reaching the final half-dozen players way, way back on January 13th, and poker development being so swift, there’s an argument to say that when the finalists do eventually sit down to play the final table together and find a winner, it will be someone completely different from any of the players who reached that stage.