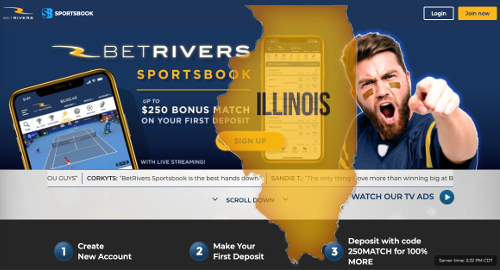 On Thursday at 10am local time, BetRivers became the first online sportsbook to launch in Illinois, a little over one year after the state approved its sports betting legislation. The product is available via desktop computer, Android and iOS devices, although the bespoke iOS app has yet to be released.

RSI president Richard Schwartz said his group was “excited to make history” in Illinois just as some of the major sports leagues are returning following their COVID-19 suspension of play. Illinois is now the 11th US state (plus the District of Columbia) to launch some form of digital wagering.

RSI has teamed with Rivers Casino Des Plaines, which is owned by Churchill Downs Inc although gaming operations are managed by RSI’s parent firm Rush Street Gaming. Des Plaines was also the first Illinois casino to launch a retail sportsbook in March that lasted all of a week before Gov. J.B. Pritzker ordered the state’s gaming venues to close their doors to minimize COVID-19 transmission.

The state’s betting legislation originally called for all mobile betting customers to register in-person at a local casino but Pritzker waived this requirement last week as the casinos had yet to receive clearance to restart operations. The Illinois Gaming Board issued seven ‘master betting licenses’ last week, and Des Plaines is reportedly the only one of those recipients to have requested online approval so far.

Initially, the deal will see Roar launch a BetMGM-branded retail sportsbook at the Tribes’ Spirit Mountain Casino before the year is through. An on-reservation mobile betting app will follow, with the possibility of a statewide online sports betting product “as it becomes available to the Tribe, pending regulatory approval.”

Those qualifiers refer to the Oregon Lottery’s existing digital sports betting monopoly via its Scoreboard online sportsbook, which has left most Oregon bettors wanting not just more but literally anything else.

The SBTech-powered Scoreboard gained a new level of infamy last week when a pro bettor released a video showing the app moving the betting line on a game from -110 to -150 for that bettor alone. The Lottery initially claimed the bet required “manual approval, and during the time that took, the lines changed.”

But when asked to explain why the line didn’t move for any other bettors, the Lottery was forced to admit that “we got the info wrong.” The Lottery was also forced to walk back its initial claim that it had contacted the bettor in question to resolve the issue, later admitting it had only left voicemails. The Lottery eventually copped that “internal process improvements are in the works.”