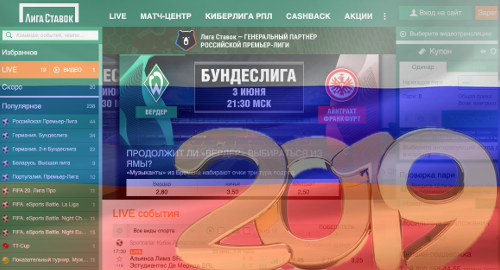 Russia’s sports betting operators managed to sustain their 2018 World Cup momentum in 2019, although COVID-19 has long since derailed that speeding train.

Federal Tax Service data showed Liga Stavok leading all Russian-licensed bookmakers with sales of nearly RUB49.5b (US$720.5m) last year, up from just RUB36.1b in 2018. The gains are all the more impressive given that 2018’s figures got a significant boost from Russia hosting the quadrennial FIFA athletic shindig.

Fonbet was a distant second with RUB38b, a 58% improvement over 2018, while Winline saw its revenue jump an astounding 270% to RUB29.6b, knocking previous third-place finisher Bingo Boom down a notch with RUB20.1b (-0.2%). Betcity completed the top-five with RUB15.8b, down 8.7% year-on-year, its second straight year of negative growth.

Only five of Russia’s 19 licensed bookmakers were in negative territory last year, with two of them (Mostbet and Zenit) posting double-digit declines. Bwin.ru, the struggling local joint venture involving UK-listed GVC Holdings, was up 49% year-on-year, albeit to a still anemic RUB647m.

No Russian bookie expects 2020 to replicate 2019’s success, as the COVID-19 pandemic called a halt to major sports events, leaving the bookmakers with no product on offer (and, in some cases, no will to carry on). Estimates for the plunge 2020’s final numbers will take have ranged from 35% to well over 50%.

Compounding matters, Russia’s online bookmakers aren’t allowed to offer casino or poker products, meaning they couldn’t depend on bettors transferring their affections like some Western betting sites reported during the pandemic’s early stages.

Russian affiliate Bookmaker-Ratings conducted a survey of its social media audience and found around one-fifth of them were playing online casinos to compensate for the lack of sports. Since Russian betting sites don’t offer these products, this is revenue flowing out of the country.

Russian-licensed bookies are believed to control only around 65% of the country’s total betting market, despite the government’s efforts to block unauthorized website domains and financial transactions. With Russian punters seeking out international sites’ broader product offering, concerns are mounting that reclaiming these former customers may prove harder than developing a vaccine.