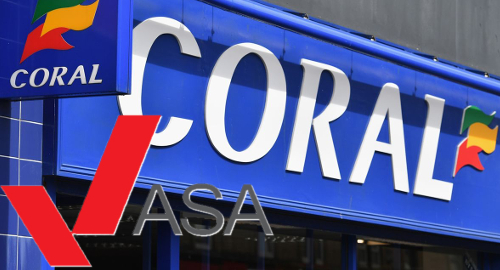 UK gambling operator GVC Holdings has won one fight and lost another with the country’s advertising watchdog.

On Wednesday, the Advertising Standards Authority (ASA) dismissed a complaint filed against GVC’s Ladbrokes betting brand for a television commercial that some viewers felt depicted gambling addicts engaging in daily activities that prioritized gambling in their lives.

The ad showed a man celebrating after filling his car’s gas tank and getting the spinning numbers to stop at £77.77. A second man then repeats the phrase ‘hit me’ as fillings are added to the sandwich he’s ordering, claiming that he likes to “double down” when the time is right. Finally, a women spins a circular clothing rail featuring only red and black garments while saying there are “few things more exciting than a spinning wheel.”

Ladbrokes’ response to the complaint was that the ad was a “fun parody of everyday life” while rejecting the assertion that gambling “took precedence over the characters’ work or other daily activities.” Lads said none of the scenes “showed gambling, real or imagined, taking priority over actions.”

Clearcast, the non-governmental organization that pre-approves UK television spots, supported Lads’ arguments, saying the spot depicted “nothing more than humorous reminders of the mechanics and routines of gambling and gaming.”

The ASA concurred, ruling that while “the characters were depicted as momentarily reminded of gambling and engaged in that analogy of the situation, they were not so distracted that they didn’t continue with those tasks.”

The ASA took a dimmer view of a tweet from GVC’s Coral brand promoting a racing free bet offer if a bettor’s nag failed to finish. The tweet contained a video link that was captioned “have another go.” The complainant viewed the tweet as irresponsible for encouraging repeated gambling.

Coral’s response was that the promotion offered “a form of insurance” in case the horse failed to make it across the finish line and was a routine “industry campaign mechanic.” There was no obligation for customers to participate and doing so didn’t require any additional funds and thus the offer was “not designed to cause financial or social harm.”

The ASA disagreed, noting that the Committee for Advertising Practice (CAP) Code requires marketers to avoid trivializing gambling, “for example by not encouraging repetitive participation.” The ASA took issue with the ‘have another go’ tag and the accompanying video’s depiction of a man “whose mood was instantly lifted following a free bet back.”

For these reasons, the ASA viewed the ad as “likely to encourage gambling behavior that was potentially harmful” and ordered Coral not to make similar mistakes in future tweets.