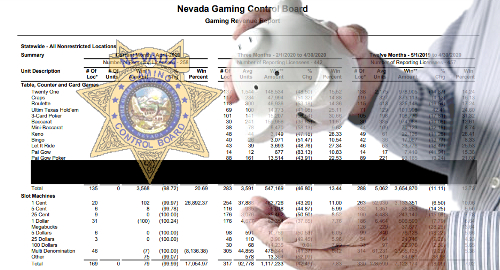 Nevada gambling regulators are keeping their April casino revenue numbers a secret, and not just because they’re the lowest total on record.

On Friday, the Nevada Gaming Control Board (NGCB) issued its casino gaming revenue report for the month of April, during which the state’s gaming venues were completely shut down to minimize further COVID-19 transmission. Which explains why revenue amounted to only $3,646,658 versus $936.4m in April 2019.

Obviously, April was a somewhat humiliating time for Nevada casino operators, who probably thought they’d seen the worst after their March revenue dipped 40% year-on-year to ‘only’ $618.1m. The casinos were ordered to shut their doors in mid-March by Gov. Steve Sisolak, who announced this week that the casinos were officially “on track” for a “phased reopening” on June 4.

With no land-based gaming going on, the NGCB’s April report is entirely based on online sports betting and online poker. But we have no idea how much of that $3.64m was betting and what was poker, because the NGCB blacked out all the data on its revenue sheet.

The report contains a footnote that states: “Unit detail is shown separately only when there are 3 or more licensed locations reporting specific unit information. Otherwise, such information is included in ‘Other’ categories.”

There are clearly more than three mobile betting operators in Nevada, but the online poker vertical is a de facto monopoly of Caesars Interactive Entertainment’s WSOP.com. So if the NGCB was to report full details on the betting data, we’d be able to reverse engineer the numbers to arrive at the (presumably) minuscule WSOP stats. And here we are.

With the casinos not reopening until June 4, May’s numbers will be equally minimal and equally opaque. The only real question will be if May’s numbers are worse than April’s. Shouldn’t some Nevada sportsbook open a market on this?