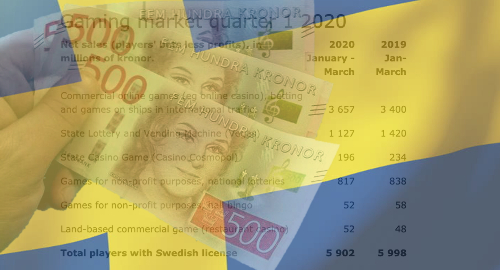 Sweden’s gambling market revenue took a step back in the first quarter of 2020 despite a modest rise in online activity.

Considering that those shipboard casinos were likely struggling to find customers late in the quarter due to the COVID-19 pandemic, it’s safe to assume that Q1’s online growth was actually higher than 7.5% (although Spelinspektionen says online activity in March and April didn’t show any major growth).

COVID-19 also did a number on the land-based operations of state-run Svenska Spel, as the ‘lottery & Vegas slots hall’ category fell by one-fifth to SEK1.13b while the Casino Cosmopol division was off 16.2% to SEK196m. National lottery sales dipped 2% to SEK817m.

The Spelpaus national gambling self-exclusion program had just over 50,500 registrants at the end of Q1, a 5% rise from Q4 2019. The figure has since increased to 51,700 by the start of May.

On that note, the Karolinska Institutet in Stockholm is looking for gamblers to participate in a study on how their activity has been impacted by COVID-19. The researchers want to know whether problem gambling activity has increased or if the lack of major sports on which to wager has led gamblers to transfer their action to online casino products.

In other Spelinspektionen news, the regulator is celebrating a Jönköping Administrative Court of Appeal ruling upholding a SEK100k financial penalty levied against media outlet Nyheter24 (News24) in 2018 for running ads for internationally licensed online gambling operators.

The case dates back to 2014, when Sweden’s regulated online market was still only an aspirational theory. Nyheter24 has the option of appealing this latest ruling to the Supreme Administrative Court, although it’s hard not to believe that the media group’s legal fees have vastly exceeded the original fine by now.

One year ago this month, BOS filed a complaint against TV4 for running a segment in which guests are given Svenska Spel instant-win lottery products that they proceed to scratch on live TV to see if they’ve won. BOS noted that these segments amounted to unfair advertising advantages for the state-run gambling operator and also didn’t include any responsible gambling messaging.

On May 20, the KO issued a ruling saying that Svenska Spel’s gratuitous product placement was indeed an “advertising element” and thus should be labeled as such. The KO also instructed Svenska Spel to disclose the nature of its deal with TV4.

BOS CEO Gustaf Hoffstedt welcomed the KO ruling, saying the “regulatory framework for consumer protection for games of money exists for a good reason” and there should be “no exception for government-owned gaming companies.” Svenska Spel is appealing the ruling, leading Hoffstedt to question why the firm was refusing to “act transparently and comply with KO’s decision.”