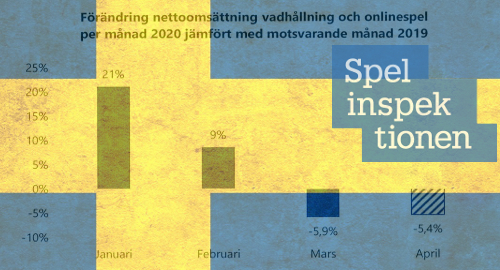 On Tuesday, Sweden’s Spelinspektionen regulatory body issued a report that said its online gambling licensees’ turnover in the month of March was 5.9% below March 2019’s figure and preliminary figures for the month of April show a 5.4% year-on-year decline.

Spelinspektionen cautioned that it hasn’t yet been able to determine whether the overall decline reflects sports bettors going dormant following the mass suspension of major sports due to COVID-19, or how much of their activity may have been transferred to online casino or poker products.

Spelinspektionen analyst Magnus Granlund told local media that, because of the way that online licensees report revenue, “we cannot say that [online casino activity] has increased, but we cannot exclude it either … It is very difficult to read anything.”

Whatever the reality, Sweden’s Spelpaus gambling self-exclusion program has yet to report any surge in customer registrations since the lockdown began. All of which questions the urgency behind last month’s proposals by Social Security Minister Ardalan Shekarabi for a weekly deposit limit of SEK5k (US$500), along with loss limits for online casino play and a cap on bonus offers of just SEK100.

Sweden-licensed operators have pointed to studies showing that the government is losing the fight to ‘channel’ gamblers to locally licensed sites, while claiming that Shekarabi’s proposed curbs would only accelerate this trend.

Spelinspektionen submitted a proposal to the government regarding a licensing regime for online gambling B2B suppliers, a plan that some Swedish-licensed operators believe would force suppliers to choose between locally licensed sites and internationally licensed operators that continue to serve the Swedish market without local permission.

Spelinspektinonen’s proposal has been given the thumbs-up from Gustaf Hoffstedt, CEO of the Branschföreningen för Onlinespel (BOS), which represents Sweden’s online licensees. Hoffstedt said his group has long supported a B2B licensing regime, and told local media that these proposals “should have been introduced yesterday.”

Spelinspektionen also revealed that it is working on possible regulatory injunctions against some 20 international operators who continue to serve the local market, while also conducting a survey to better understand the role of marketing affiliates with these international rogues.