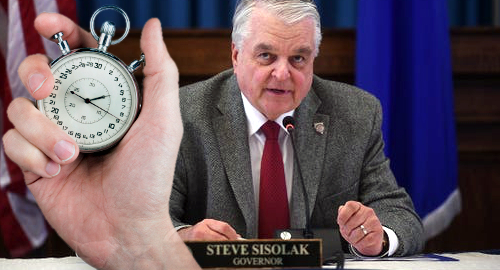 Nevada’s casinos are no closer to reopening their doors, despite the governor accelerating the state’s post-pandemic economic revival.

On Thursday, Gov. Steve Sisolak announced that some state businesses would be allowed to reopen on Saturday, one week ahead of schedule. Sisolak said the advanced timeline was the result of “a downward trend of COVID-19 cases.”

Among the businesses that will be allowed to reopen are barbershops, nail salons and other retail operations that can ensure proper social distancing rules. Restaurants can operate at 50% capacity with tables six feet apart, but their bars must remain closed, as will bars that don’t serve food, along with gyms, spas, bowling alleys and – yes – casinos.

Sisolak said last week that casinos “will not be opening at the start of Phase One,” a process that is expected to last two-to-three weeks with a likely expiration date of May 30. Sisolak said Thursday that he didn’t have a “specific metric” for launching Phase Two, saying it would depend on “benchmarks along the way.”

Sisolak added that “our actions now will determine what actions we can take in future,” with the implication that casinos won’t necessarily be allowed to open on June 1 if the state’s COVID-19 infection rate takes a sudden upward turn.

NEVADA REGULATORS OKAY RE-OPENING GUIDELINES
Prior to Sisolak’s announcement, the Nevada Gaming Commission (NGC) approved the casino reopening health and safety policies released earlier this week by the Nevada Gaming Control Board. The changes include occupancy limits of 50% of any casino gaming area’s capacity and strict caps on the number of players allowed at each type of gaming table.

The NGC didn’t respond to a request to incorporate additional safeguards for casino staff as detailed earlier this week by the Culinary Union and Unite Here. Those safeguards included ensuring workers had enough personal protective equipment and shielding workers from retaliation if they refuse to work in a situation they deem unsafe.

NEVADA DRIVE-THRU BETTING NOW OFFICIALLY A TREND
Until the casino sportsbooks are allowed to open, expect more operators to follow the trail blazed by the South Point Hotel Casino & Spa, which this week began allowing bettors to drive up to its valet entrance to register and/or make a deposit to their sportsbook account without having to leave their vehicle.

Nevada’s timid embrace of online gambling means that, while bettors can wager to their heart’s content via their desktop or mobile devices, they can only open and fund their accounts in person. Which, since the sportsbooks are all closed, presented something of a Catch-22 for both bettors and bookies.