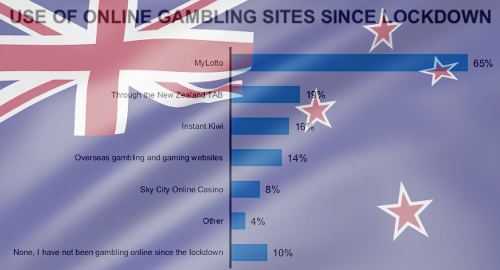 Only 9% of New Zealand’s gamblers report gambling more since they were put under pandemic lockdown, with boredom playing a major part of that increase.

A new COVID-19 impact study released by New Zealand’s Health Promotion Agency queried some 1,190 adult respondents – with an overrepresentation of Maori and Pasifika respondents – regarding their use of alcohol, tobacco and gambling products during the country’s Level 4 lockdown.

Around 39% of respondents said they’d gambled since the lockdown took effect. Of these gamblers, 50% reported gambling less than usual, 41% about the same and 9% gambled more than usual. Of the latter group, the 18-24 age demo were more likely to report gambling more (22%).

Half of those who said they gambled online less than usual during the lockdown said it was due to money concerns while only 13% said they were concerned that they might be gambling too much.

Of those who gambled online more than usual, just over half (51%) said it was (duh!) because they couldn’t access their usual land-based options. Around one-third said gambling relieved their lockdown boredom, and one-quarter said it helped them relax. Around 28% said they gambled because they were under financial pressure and felt the need to win some money.

The overwhelming lockdown online choice was the state-run MyLotto site, which was used by 65% of online gamblers. Lotto New Zealand recently reported that around 125k customers had registered with its online site after the suspension of retail sales at the end of March, which boosted online sales twofold.

The New Zealand Tab ranked second on the online chart with 19%, while Lotto New Zealand’s Instant Kiwi app wasn’t far back at 16%.

The internationally licensed gambling sites that are the bane of domestic operators’ existence placed fourth with 14% participation. Last July, New Zealand launched a public consultation on whether to authorize a competitive online marketplace but the government has been mum on its findings.

Casino operator SkyCity Entertainment Group’s Malta-licensed online casino took fifth place with 8% as its number of registered users shot up to over 15,000. In February, the site had only around 3,500 users, so clearly the lockdown has been a welcome shot in the arm.