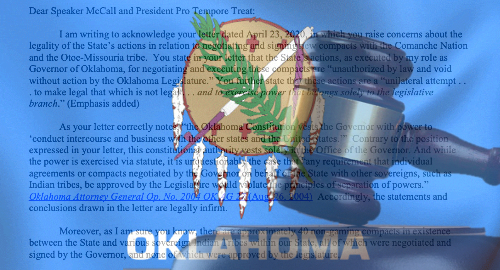 Last Friday, Oklahoma Gov. Kevin Stitt issued a letter to the leaders of the state’s two legislative chambers, in response to their concerns (and those of Attorney General Mike Hunter) that the gaming compacts Stitt announced last week with the Comanche Nation and the Otoe-Missouria Tribe may not survive legal scrutiny.

The compacts would allow each tribe to build new casinos off tribal land (pending approval of the federal Bureau of Indian Affairs) and to operate both retail and on-site mobile sports betting, despite the state having yet to authorize legal wagering by any of its licensed gaming operators.

Stitt’s letter takes issue with legislators’ claims that the compacts are “unauthorized by law and void without action by the Oklahoma Legislature.” Legislators further allege that Stitt’s actions represent a “unilateral attempt … to make legal that which is not legal … and to exercise power that belongs solely to the legislative branch.”

Stitt said his office received “numerous, exceptional legal opinions” supporting his right to “‘conduct intercourse and business with the other states and the United States.” Stitt says it’s “unquestionably” correct to say that requiring legislators’ approval of governor-negotiated deals “with other sovereigns, including Indian tribes … would violate the principles of separation of powers.”

Stitt added that there currently are “approximately 40 non-gaming compacts” between tribes and the state, “all of which were negotiated and signed by the governor, and none of which were approved by the legislature.”

Oklahoma is currently locked in a legal tussle with 10 different tribal gaming operators over whether the compacts that expired on January 1, 2020 were supposed to automatically renew for additional 15-year terms. The federal judge overseeing the dispute has given the parties until May 31 to mediate some compromise.

All Oklahoma casinos are currently closed due to the COVID-19 pandemic but Stitt announced plans last week to allow certain businesses to reopen, despite public health officials warning that the state hasn’t yet seen a reduction in new coronavirus infections, hospitalization and deaths.

Stitt’s “measured” reopening plan doesn’t specifically address casinos, but “entertainment” facilities – including restaurants and movie theaters but not bars – will be cleared to reopen on May 1. Phase 2, which will start 14 days later (assuming no uptick in infections), would allow non-essential travel and see bars open with reduced standing room limits.

Again, assuming no rise in infection rates, Phase 3 would follow 14 days after Phase 2, but the governor’s office has yet to offer specifics of what that phase will entail.