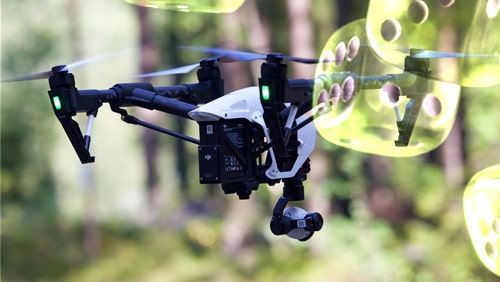 Drones are now being used for virtually everything, from conducting delicate military operations to delivering pizza. They may have found a lot of success as recreational devices, but their capabilities go well beyond providing enjoyment on a Saturday afternoon at the park. Countries have begun exploring how to implement the devices to help in their management of the streets, and the use of drones by law enforcement is on the rise. In India, drones have now helped law enforcement uncover an illegal gambling den while it was patrolling from the sky to make sure residents were adhering to lockdown orders.

13 individuals were arrested after the drone’s camera spotted the illegal gambling activity, which led to local police crashing the party. The group had been gambling on the roof of a building, not suspecting that there were eyes in the sky patrolling the neighborhoods of Karnal. According to a local police officer, “We have been keeping a vigil on the lockdown violators with the help of drone cameras. Besides, we are using it to combat gambling activities. On Wednesday evening, the city police captured the accused while gambling and arrested them.” As a result, drones will now most likely be tasked with not only keeping the streets clear, but with looking for illegal gambling, as well.

This isn’t the first time that drones have been used to uncover illegal gambling. China set the bar two years ago when it began using drones regularly to look for gambling activity, and has made several significant busts since then. The success they’re seeing will only lead to further interest in drone deployment for policing activity around the world.

The drone-aided bust in India wasn’t the only one this week. In Bengaluru, police raided a gambling house, but lost many of the gamblers in the process as they made their great escape. A couple of individuals weren’t so lucky, though, and were caught by law enforcement.

In that incident, at least one gambler became so incensed over the raid that he decided to take his frustration out on a police officer. That ended with 12 people attacking the officer, but it isn’t clear if he was seriously injured. He was saved by two of his colleagues, and several of the attackers have already been arrested. An officer involved in the incident explains, “The constable was manhandled. We are ascertaining the identity of the other accused and they will be arrested soon. We had received complaints about the gambling in the area since the lockdown.”

Those weren’t the only two illegal gambling busts in India this week. 10 people were arrested by Danilimda police on Wednesday after they were discovered gambling during a routine patrol by law enforcement. A police officer explained of the bust, “On Wednesday, while we were on patrol, we followed up on a tip-off and raided a house in Zaid Duplex, which also comes under cluster quarantine. We found 10 persons sitting in a circle and gambling without maintaining social distancing. We seized Rs 47,000 [$616] from them and booked them under Prevention of Gambling Act and for violation of CrPC Section 144.”

While the latter raids weren’t facilitated by the use of drones, the continued illegal gambling activity found in the country, coupled with the success drones are demonstrating at being all-seeing eyes, will lead to more of them being used by more jurisdictions around the world. Within the next decade, it might not be unusual to see the aerial surveillance machines keeping an eye on everything, everywhere, all the time.