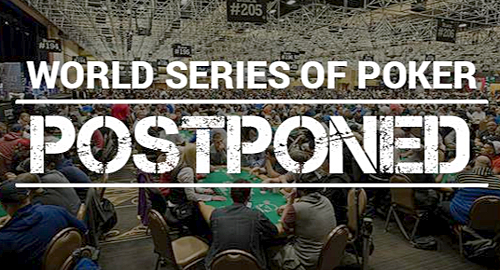 The World Series of Poker (WSOP) has bowed to the inevitable and postponed its 2020 event due to the COVID-19 pandemic.

On Monday, the WSOP organizers announced that the 51st edition of the tournament would not get underway as planned on May 26 at the Rio All-Suite Hotel & Casino in Las Vegas “as a result of the public health emergency involving COVID-19.” The event is being moved to the “fall of 2020,” with specifics to be determined later.

WSOP exec director Ty Stewart said his group was “committed to running the World Series of Poker this year but need additional time to proceed on our traditional scale while prioritizing guest and staff well-being.”

The rescheduled event will of course include the $10k buy-in Main Event championship, but the announcement indicated that the overall schedule – which featured a record 101 gold bracelet events – will be “revisited” and “changes are anticipated.” Will your favorite event make the cut? Only time will tell.

In the interim, “an expanded series” of official WSOP competitions will be conducted online via WSOP.com and “through partnership with international operators.” Real-money play on WSOP.com is currently only available to US players in Nevada and New Jersey.

The WSOP had slow-rolled making a decision on whether or not to alter its 2020 timeline despite Nevada Gov. Steve Sisolak having extended his original 30-day shutdown order of all casinos through the end of April.

Last week, Las Vegas Mayor Carolyn Goodman begged/bullied the governor to lift the order, which she called “total insanity,” but Sisolak said he would listen to the medical experts regarding “what’s in the best interest of keeping all Nevadans safe.”

The WSOP’s next scheduled US land-based live event is the Global Casino Championship at Harrah’s Cherokee casino in North Carolina on August 11. For the moment at least, the WSOP says the event will go ahead as planned, as will the WSOP Europe at the King’s Resort in Rozvadov in the Czech Republic.