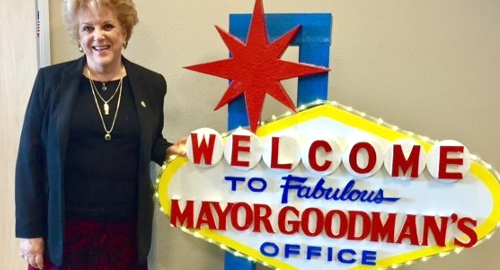 On Wednesday, Las Vegas Mayor Carolyn Goodman climbed up into her bully pulpit and went on a bit of a rant, calling the COVID-19-related shutdown of all casinos “total insanity, in my opinion.” Goodman claimed that the state’s 128 coronavirus-related deaths “represent less than a half of 1% of our population,” and thus the gutting of Nevada’s casino-based economy “makes no sense.”

Goodman slammed Gov. Steve Sisolak, who ordered a 30-day shutdown of all gaming venues on March 17 and later extended that order through the end of April. Goodman claimed Sisolak had “no plan in place” to restart Nevada’s economy and yet still urged him to “Open the city. Open Clark County. Open the state. For heaven’s sake, being closed is killing us already.”

That last claim was amply demonstrated this week as the Lakeside Inn and Casino on Lake Tahoe announced that it was closing its doors for good after 35 years. The casino previously said it hoped to reopen once the closure order was lifted but now says the math simply doesn’t work.

Goodman claimed that COVID-19, in its current form “or a derivative thereof, will be part of what we work through going forward.” Goodman said Nevadans were “adults with brains” who knew to “wash our hands and take all precautions not to spread this disease.”

MASKS AND GLOVES, NO RECTAL THERMOMETERS
Nevada gaming execs are reportedly mulling strategies that might allow their casinos to reopen using many of the precautionary moves Macau casinos used following their 15-day shutdown in February. When the casinos reopened, they required all guests and staff to wear masks, while limiting the number of players at each gaming table and shutting down every second slot machine.

Nevada execs are also suggesting opening only one-third of their hotel rooms, as well as restricting entrances and exits to ensure they can monitor guests’ temperatures using ‘non-invasive’ methods.

Sisolak doesn’t appear all that impressed with the various proposals and criticisms, telling Bloomberg that reopening the state was “not going to be a political decision for me … I’ll take a lot of advice from our medical folks and determine what’s in the best interest of keeping all Nevadans safe.”

MACAU A TEMPLATE BUT ALSO A WARNING
There is a growing call to restart the economy, not just in Nevada but across the United States. But anyone who believes simply opening up the casinos will cause tourists to come flooding back to Vegas need only look at Macau’s ‘recovery’ following its shutdown.

Macau’s March casino revenue was down 80% year-on-year and forecasts are that April’s figure could fall 95% as tourist traffic has slowed to a trickle (although that’s partly due to travel restrictions imposed in Mainland China’s largest province).

Surveys have shown Americans currently have serious misgivings about the wisdom of getting on a jet plane, particularly for something as trivial as a holiday. With Vegas dependent on out-of-state visitors for its survival, simply reopening the casinos won’t be the panacea Mayor Goodman appears to think it is.