Home / Business / Australia’s online gambling surge no cause for alarm 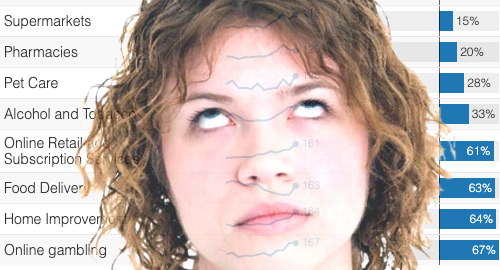 Australian online gambling activity has shot up by two-thirds since the COVID-19 pandemic took hold, although it’s not perhaps the great cause for alarm that anti-gambling campaigners are making it out to be.

Data published weekly by economic analysts AlphaBeta and credit bureau Illion show online gambling transactions were up 67% in the week ending March 29 compared to a ‘normal’ week. That represented the highest growth among the 18 categories studied from the sample of 250k Aussies.

While essentials such as supermarkets and pharmacies also enjoyed growth, the biggest gainers next to gambling were alcohol & tobacco (+33%), online retail & subscription services (+61%), food delivery (+63%) and home improvement (+64%).

The week in question marked the first since the Australian government launched its economic stimulus package, and saw a 10-point rise in overall discretionary spending (which remains 16% below normal).

While local media quoted the usual suspects warning of Australians losing their minds and/or shirts while gambling digitally, it’s worth noting that this online surge came in the week that began with the shutdown of virtually all land-based gambling options, including casinos, racetracks, betting offices and the video poker machines (pokies) in thousands of pubs and clubs.

In other words, the online surge appears to be little more than transferred affections, just as food delivery has soared while restaurants & fast food (-13%) and cafés (-42%) have declined.

Furthermore, while some novice online gamblers may indeed get carried away at first, numerous studies in vastly different markets have demonstrated that the introduction of new gambling options leads to only a short-term spike in problem gambling activity, after which consumers adapt to the new reality and the rates return to their baseline.

So yes, there will be a few gamblers who overdo it, just as there will be some online shoppers who spend themselves into the poorhouse making ill-advised credit card purchases at 3am because they’re bored, as well as some men who gain 15 pounds because they order nothing but pizzas with cheese in the crust rather than the occasional mixed green salad.

It is obviously incumbent on Australian’s licensed online sports betting operators to handle new customers with a certain degree of care and not bombard them with bonus offers. Operators should also recognize that this surge in activity will likely be extremely short-lived. We will get through this just fine in the end, despite what the Helena Handbaskets of the world would have you believe.