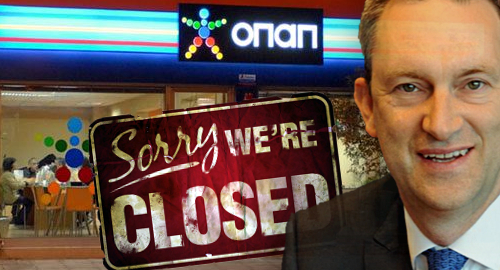 Greek lottery and betting operator OPAP is looking for a new CEO just as the COVID-19 pandemic has reduced its operations to a standstill.

On Wednesday, OPAP announced that CEO Damian Cope intends to leave the company following the conclusion of his current four-year contract at the end of May. After that date, Cope will serve as a board adviser from his home in the UK. Cope (pictured) offered no reason for his exit other than saying he was looking forward to “rejoining my family.”

A CEO succession plan is underway that will consider both internal and external candidates, but chairman Kamil Ziegler will serve as interim CEO if a likely lad (or ladette) isn’t identified by the time Cope flies the coop. Ziegler thanked Cope for his contributions as well as his “advanced communication” of his exit plans.

OPAP AT A STANDSTILL AS COVID-19 CLOSURES BITE
OPAP simultaneously announced that the Greek government’s COVID-19 mitigation efforts would have a material impact on the company’s 2020 financial performance. OPAP estimated the current impact at around €130-140m in monthly revenue and €50-53m in monthly earnings.

All OPAP retail lottery and betting outlets, as well as its PLAY gaming halls and the horseracing facility at Markopoulo Park, were ordered closed on March 14 and will remain shut until at least April 11. Independent retail lottery resellers are also shut, limiting access to OPAP’s Hellenic Lotteries products. OPAP’s retail operations in Cyprus are currently shut until April 15.

OPAP has an online betting and lottery business that remains a minor contributor to the company’s overall revenue. OPAP said the online lottery segment has enjoyed a modest uptick since the retail lockdown but the betting segment suffers from the same dearth of live sports events facing bookmakers around the world.