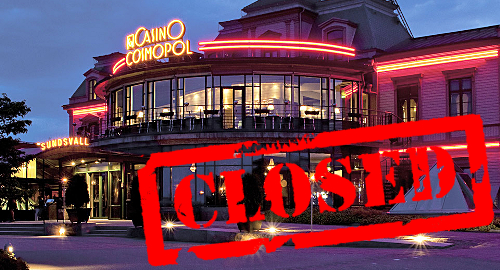 On Friday, Svenska Spel announced that its Casino Cosmopol subsidiary would “temporarily close” its venues in Stockholm, Gothenburg, Malmö and Sundsvall after the government ordered a ban on gatherings of more than 50 people to minimize further spread of the COVID-19 coronavirus.

Svenska Spel CEO Patrik Hofbauer said his company had kept its casinos open “as part of our responsibility to keep the community going.” The casinos had observed the government’s previous order to limit public gatherings to 500 people but the new 50-person limit made the shutdown “necessary.”

Casino Cosmopol was already struggling, having reported a 10% decline in its Q4 2019 revenue to SEK443m (US$44m), representing roughly one-sixth of Svenska Spel’s overall revenue. Like all operators, Svenska Spel’s sports betting unit is currently suffering from a dearth of events on which to offer wagers due to the mass cancellation of live sports.

Until Sunday, Sweden had yet to see the same level of social isolation rules imposed by other governments, including other Nordic countries. Nightclubs, cafés and other social hotspots were until this weekend carrying on as usual, with the government putting the onus on the individual to comport themselves in a responsible manner.

Sweden’s horseracing sector has yet to follow the lead of most of the world’s other markets by shutting down operations to reduce the likelihood of COVID-19 transmission. That would deal a hard blow to state-run operator ATG, which until recently held a monopoly on race wagering (and still controls all pari-mutuel betting).

Fortunately for ATG, the company branched out into online casino and sports betting in January 2019 with the launch of the country’s new regulated online gambling market. The new verticals allowed ATG to report record revenue of SEK4.4b in 2019, despite its mainstay racing product’s revenue falling 7% from 2018.

This online casino reliance recently prompted ATG to impose new mandatory loss limits on its customers, who will be required to establish their own personal limit, which cannot be changed for a seven-day period to discourage them from chasing losses.