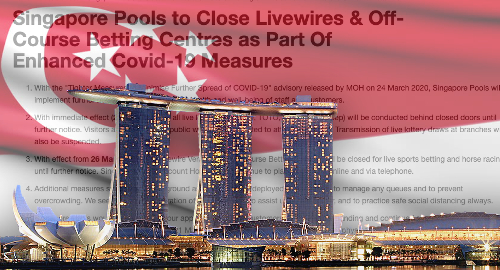 Singapore’s two casinos are imposing new limits on who gets to play on their gaming floors, while Singapore Pools has shut its retail sports and race betting operations in response to the COVID-19 pandemic.

MBS announced that its casino facilities were now only accessible by “Sands Rewards Club Gold and above” members, as well as local residents who have already paid the annual entry levy, which was increased to SG$3k (US$2,100) last April. RWS said its gaming floor was now accessible only by existing Genting Rewards members and locals who’d paid the annual levy.

Both casinos have also adopted social distancing and crowd control requirements, in keeping with the Casino Regulatory Authority’s guidelines. Singapore’s government has ordered all bars and entertainment venues to be closed until at least April 30 and it remains to be seen whether the casinos will eventually be forced to halt their gaming operations.

Both casinos rely heavily on international gamblers but Singapore’s National Development Minister announced this week that the city-state would “disallow all short-term visitors from anywhere in the world to enter or transit through Singapore.” The Minister offered no details on how long this restriction would last.

Singapore Pools also announced that it would no longer allow members of the public to attend its live lottery draws, while retailers will no longer be permitted to broadcast the live draws to avoid excessive congregations of avid lottery players. The company is also deploying “on-ground assistants” to “manage any queues and to prevent overcrowding” at its lottery outlets.

With retail gambling options rapidly evaporating, the Singapore Police Force (SPF) chose Thursday to issue a warning regarding “scams involving illegal online betting websites and applications.” The SPF noted that it received “at least 13” reports of such scams in 2019, which resulted in total losses to consumers of SG$874k.

The SPF said the scammers often use online dating platforms such as Tinder, OkCupid and PakTor to befriend victims, who are then encouraged to deposit money with sketchy betting sites or apps. Needless to say, this is the last time the victims see their cash.