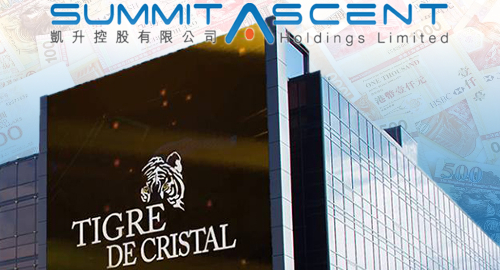 Casino operator Summit Ascent Holdings saw its profits soar in 2019 despite a comparatively modest increase in revenue at its Tigre de Cristal casino in the Primorye gaming zone outside Vladivostok, Russia.

The profit surge came in part due to a rise in bank interest income and some positive foreign exchange figures, along with decreased employee costs and depreciation charges. The company also enjoyed a serious decrease in debts owed by VIP gamblers operating on credit markers.

Tigre de Cristal actually reported slight declines in both VIP turnover and VIP win rate in 2019 but rebates to VIPs fell nearly 15%, allowing VIP revenue to rise 12% year-on-year to HK$122m. The casino operated an average of 22 VIP tables last year, up from 14 in 2018.

The slots business, which largely targets a local Russian player base, saw handle rise nearly one-fifth while slots revenue shot up nearly one-third to HK$143m as win gained half a point to 5.5%. The daily average number of slot machines in action last year was 336, up from 310 the year before.

Non-gaming revenue was up 15% to HK$50.6m as hotel occupancy rates rose four points to 88% on weekends and rose eight points to 63% on weekdays.

Alvin Chau, the Suncity boss who took over as Summit Ascent chairman last year, said Tigre de Cristal had been “rapidly making alternations and improvements to attract and retain our discerning clientele.”

Summit Ascent noted that the COVID-19 coronavirus pandemic led Russia to temporarily ban the entry of Chinese nationals, including those from Hong Kong and Macau, which has obviously had an adverse impact on visitation and VIP activity. But the company said the current quarter is traditionally a slow one for Tigre de Cristal and it anticipates “a quick rebound” once the pandemic abates.

Summit Ascent also announced that exec director Eric Landheer had tendered his resignation after a “personal disagreement” with the board regarding the company’s “strategic business development directions.” Landheer’s exit means he “ceased to hold any position within the group.”