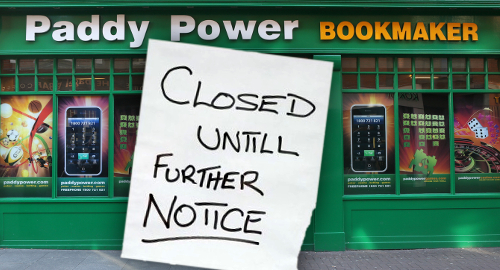 Ireland’s bookmakers are closing their retail operations until at least the end of the month in a bid to reduce the further spread of the coronavirus.

On Monday, the Irish Bookmakers Association (IBA) announced that “most” of its members had agreed to “cease trading … until at least March 29th.” The IBA said the voluntary decision had been made “in the absence of specific guidance for their sector.”

The IBA conducted a call with its membership on Monday morning, in which they discussed “the clear Irish government guidance that has been issued around social distancing.” Ireland’s government has urged individuals to keep a two-meter distance between themselves, a benchmark that would be hard to achieve in the traditionally cramped confines of a betting shop.

IBA chairperson Sharon Byrne said it was “very important that the retail betting sector acts responsibly and plays its part” in limiting the spread of the virus in Ireland. Byrne said “the vast majority” of IBA members would “look to close their doors in the next couple of days once staff and customers have been informed” but noted that decisions on if and when to close “lies with each retailer.”

Ireland had a total of 169 confirmed Covid-19 cases as of Sunday (plus another 52 in Northern Ireland) and Taoiseach Leo Varadakar said Monday that the country could expect those figures to rise by 30% each day for the foreseeable future. Pubs and clubs recently announced they too would remain closed until at least March 29th.

The IBA’s announcement won’t be welcomed by UK-listed gambling operator Flutter Entertainment, whose operations include betting brand Paddy Power. On Monday, Flutter offered a dire estimate of the Covid-19 impact on its 2020 earnings, which the company said would fall even harder if its UK and Irish betting shops were ordered to close.

Paddy Power stated that it would close its 266 Irish shops on Tuesday morning while local rival Boylesports said its 278 shops would stay open until Wednesday evening. Staff at both operators will be paid in full during the shutdown.

Ireland’s retail betting market was already struggling after the government doubled the tax on retail sports and race betting turnover, a change the IBA had fought tooth and nail over concerns that the increase would be the straw that broke the backs of smaller bookmakers.