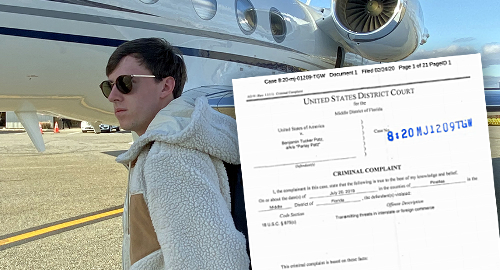 A youthful sports bettor who won fame last year for winning over a million dollars has been charged with threatening violence against professional and college athletes as well as their families.

On Wednesday, the US Attorney’s Office for the Middle District of Florida charged Benjamin Tucker Patz aka Parlay Patz with transmitting threats in interstate or foreign commerce. If convicted, Patz could spend up to five years in federal prison.

The 23-year-old Patz received media coverage late last year after he won over $1.1m in less than two months on parlay wagers with New Jersey sportsbooks operated by William Hill. But the complaint filed Wednesday suggests that Patz was anything but a winner outside the sportsbook.

The complaint features testimony from an FBI agent who detailed numerous incidents in which Patz sent messages to athletes via his Instagram account. Some of these messages referenced unsuccessful bets that Patz had placed on these athletes’ teams and expressed his view that the athletes had cost him money.

On March 9, Patz messaged a Pepperdine University basketball player, saying “Your throat will be severed open with a dull knife,” “Your entire family will be beheaded and burned alive,” “I will enter your home as you sleep and kill you,” and “Watch your back, you’re a dead man walking.”

On July 4, Patz messaged a Toronto Blue Jays player that “I WILL BEHEAD YOU NIGGER” and “I WILL GAS YOUR DAUGHTERS AND THEN SEVER THEIR THROATS OPEN WITH A DULL KNIFE.”

Patz wasn’t content to threaten players. On July 20, Patz messaged the girlfriend of an Atlanta Braves player saying “Your husband will be beheaded” and “I’ll enter your home while you sleep and end both of you.” A Kansas City Royals player was told “I will cut open the throat of your baby.”

The complaint states that hundreds of accounts received similar messages, with some referencing Patz’s betting losses, including telling a University of Arizona basketball player that “Your worthlessness costed me over 100,000$ tonight! Sad!!”

The complaint notes that Patz’s “substantial and persistent online sports wagering suggests that PATZ may have threatened athletes who played in games on which he had unsuccessfully wagered and lost money – or that he may have tried to influence the outcome of upcoming sporting events on which he had wagered.”

The FBI got Facebook Inc to disclose the email account with which the offending Instagram account was registered, and a check of that in-box and IP address data was enough to convince the FBI that there was sufficient justification for filing the criminal complaint.

The allegations against Patz will undoubtedly long outlast his current 15 minutes of infamy, as they will be cited in perpetuity by anti-betting campaigners who always claimed that gambling would corrupt youth, only now they’ll be able to parlay that with claims that betting turns kids into murderous maniacs. Or at least internet tough guys.