Stay away from Scientific Games

Scientific Games reported earnings last week. They were not good, but they were still important. One thing all should know about Scientific Games is that the price action of the stock over the last 5 years makes no sense at all. It jerks every which way incoherently, almost like a penny stock being manipulated by pump and dump scammers. I am not saying that this has actually happened and I am not making any accusations of impropriety. I’m just saying recent movements seem to resemble this. It’s totally bonkers. To wit, shares rose 1,240% from February 2016 to May 2018, despite the company consistently losing money during that time and drowing in debt service, refinance costs, and other unproductive dead weight. We caught that weird nutty malignant bubble-tumor thing here and I recommended shorting it at $52 on January 23 that year. The position took about 6 months to mature but those who hung on did well. The stock eventually bottomed at $15 by the end of 2018, right around where it bottomed in March 2009. The shares have had a couple of dead cat bounces since then and are now floating atround $23. I don’t see any potential for another rally here and I can’t understand why anyone would buy this company, finances being a disaster train wreck. If it jumps back up to $50 or so for whatever reason, I guess we can short it again. That would be fun.

Scientific Games is levered 4:1 and I see no way out of the hole without a bankruptcy restructuring, if that will even be possible by the time it becomes necessary. I wouldn’t be surprised if the whole company is just liquidated in pieces in the end for lack of a buyer.

Back to last week’s earnings, they were pretty bad. EPS missed “consensus” by 71 cents and revenue missed by $32M. The “consensus” was at a positive 25 cents, and the quarter ended with a loss of 46 cents a share. Side note: The fact that anyone on Wall Street even takes consensus estimates on anything, seriously, is testament to the diseased culture of herded mob groupthink follow-the-leader investing where everyone chases everyone else around in circles like a bunch of poodles chasing one another’s tails and yapping high pitched barks about bull markets or whatever. They keep chasing faster and faster until they all get so dizzy and sick trading money around in the same bank circuits that they all fall over and throw up on themselves. Maybe that’s what happened when Scientific Games shot up to $63 for no apparent reason. The poodles got a bit too excited there I guess.

Forget “consensus”. Just look at the numbers and the business and decide as an individual human with a mind. Looking at what other people say individually as a check on your own research is one thing, but averaging out what everyone else says in a “consensus” as if economic realities are based on focus groups and treating it all like a politician would a campaign, is just complete nonsense.

Anyway, I digress. Got caught in a rant there. There’s little point in going any deeper into the earnings numbers here. There is just too much debt and not enough growth potential for the company to ever climb out of it. No dividend, nothing worth even considering. The only reason the company was at all profitable in 2018 by the way was because of a “$183 million reversal of a reserve related to resolving the Shuffle Tech legal matter.” Reversal reserve resolve Shuffle Tech…Pad kid poured curd pulled chord paired cod, and she sells seashells by the sea shore. But why the hell would anyone sell sea shells by the sea shore? They’re all right there on the ground for Pete’s sake! And who is Pete?! Is that girl selling seashells by the sea shore transgendered or something?

Anyway, Scientific games is, nevertheless, very much worth keeping an eye on. Not because you should buy it, ever, but because as a firm higher up in the structure of production towards the capital goods sector, its price is levered to the initial turn of the credit cycle, before it affects other sectors down the line towards the consumer sector. In other words it can serve as a warning for a turn of the cycle. Provided that the stock isn’t getting pumped or something.

If we look at the history of Scientific Games at and around the last turn, we see that the stock collapsed from October 2007 when the S&P 500 topped, to January 2008 by 61% to a low of $15.87 when it was getting clearer that the global economy was getting sick. By the time the S&P finally bottomed at 666 in March of 2009, Scientific Games was still trading at highs of $15 that month, where it initially collapsed down to in January. The initial collapse in the stock proved to be predictive. 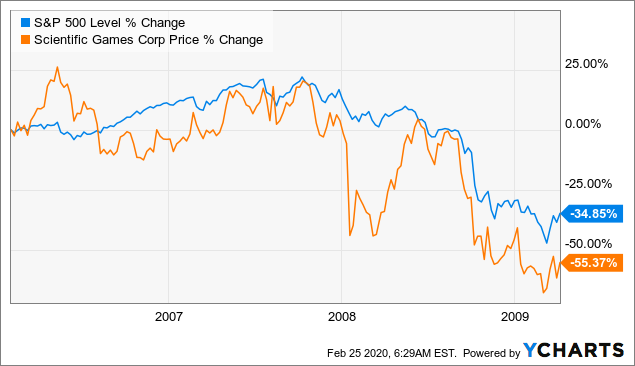 There is a good chance that the credit cycle will indeed turn this year. I can’t say for sure yet. I will hopefully be able to tell if it’s happening by mid June. One earlier indicator that it just may be, could be Scientific Games. If lows of $14.79 are breached to the downside before this summer, then it could be a good indicator of a turn. I wouldn’t be surprised if we see those lows get breached soon, since it looks like we may have a trigger in place already – the coronavirus panic.

This crazy panic has reached a fever pitch and its shutting down global supply chains. The media loves themselves a nice good panic over nothing. It gives them ratings as everyone is glued to the news. But if the medical community had any sense to it and wasn’t just fueled into a frenzy by the media dogging it on, they’d just tell the elderly and those with underlying illnesses to say in their homes and focus aid towards them, since they are pretty much the only population at serious risk from this epidemic. The sick and elderly are of course not an integral part of production anyway and they are the biggest recipients of government welfare, so keeping them alone quarantined would not risk distrubing and collapsing the rickety global debt mountain that must be constantly fueled by production and growth. Almost everyone else can call in sick for a few days if they have to, with a small portion of hospitalizations and that would be pretty much it.

But no, instead they have to put entire cities on lockdown as if this is the beginning of a bona fide Nazi zombie apocalypse and slam the breaks on the entire global economy. I wonder what that’s gonna do with everyone levered up the wazoo?

Yes, I am aware I still have a (small) buy call out on Macau despite this. That’s a short term trade, not an investment. I still expect that eventually good news out of China will cause Macau stocks to zoom higher on a short term basis. I could be wrong. We’ll see. That’s why I only recommended 5% positioning maximum on that trade. But once summer hits it’s a completely different story. We’ll see what happens by May on that one, but beyond that, it doesn’t look too good.