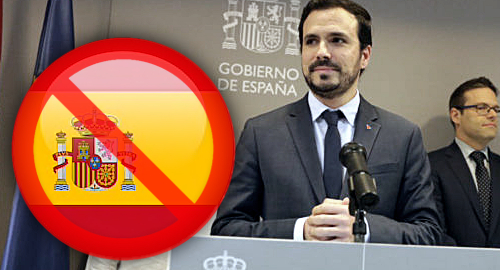 Spain’s online gambling operators learned Friday of over 100 new restrictions on their ability to promote their wares to consumers.

On Friday, Spain’s Minister of Consumer Affairs Alberto Garzón announced more details of the government’s plans to rein in gambling advertising. Spain’s cabinet will begin discussing the proposed changes on Monday after publication of the Royal Decree although the text has reportedly already been submitted to the European Commission for approval.

Garzón (pictured) said the new rules will likely prohibit around 80% of current online gambling ads, and he justified the curbs due to the gambling sector having “an impact on public health.” Garzón claimed that the over 100 proposed measures “represent a first step” in dealing with the alleged “social alarm” in Spain over gambling.

As stated above, the Royal Decree has yet to be published, but here’s what we’ve managed to cobble together from various Spanish media outlets. As previously announced, online gambling ads on radio, television and online video platforms will be limited to a four-hour window starting at 1am. Betting operators will be permitted to run ads during live sports broadcasts, but only after 8pm and ads cannot contain exhortations to ‘bet now’ or information related to specific in-play wagering markets.

Garzón defended the live sports carveout, noting that a blanket ban would only serve to steer “people who need protection” to operators licensed outside Spain, “where they would have no protection at all.” Garzón is apparently unaware that this rationale could be applied to all of the new restrictions, but we digress.

Sponsorship of sports teams will still be permitted, although team kits will only be allowed to feature a betting operator’s logo or trademark and these logos/marks won’t be permitted on kid-sized kit. Operators also cannot enter into naming rights deals with sports stadiums or conduct in-stadia advertising.

Similarly, online gambling ads will be barred from any public space that admits minors, as well as via outdoor ad channels (billboards, bus stops, etc.). Local governments will reportedly have some leeway on whether or not to permit outdoor ads for land-based betting, bingo or casino operators.

Strangely, ads will apparently be permitted to run in print media and via legit news media websites, provided these ads adhere to all the other rules.

Gambling ads can no longer feature endorsements from famous individuals, particularly those whose fame derives from the worlds of sport or entertainment, and it will be the government that defines who qualifies as a celebrity.

As with many other jurisdictions, ads cannot ‘glamorize’ gambling, equate gambling with financial success or present gambling as the solution to financial problems. Ads also can’t promote the idea that skill prevails over luck in determining a gambling outcome, although poker operators will reportedly be granted some flexibility on this front.

As previously announced, advertising cannot contain references to new customer bonus offers, including free bet promos, and bonus offers to customers made directly via operators’ websites will be capped at €100.

Pop-up ads and other ‘intrusive’ forms of advertising won’t be permitted on websites unless a user has already taken some concrete action toward wagering.

Operators must make the effort to ensure minors can’t follow operators’ social media accounts and operators can’t advertise on any social media channel that lacks the capacity to filter users by age.

Interestingly, betting touts will be required to reveal statistics on how their picks have panned out and betting operators will be forbidden from working with any tout who fails to publicly reveal their winning/losing percentages.

Free-play random number generator (RNG) casino games will have to use the same RNG system as the real-money product. Operators have come under fire in the past for free-play RNG with a higher win-rate than the real-money version, which critics have said creates an unrealistic expectation of success in customers’ minds if/when they switch to the real deal.

The state-run SELAE and ONCE lotteries will have to observe the same content restrictions as private operators but they will not be subject to the same time constraints for broadcast ads. Private operators had loudly protested rumours of these carveouts, particularly given some embarrassing incidents involving youths purchasing lottery products.

Failure to abide by these new restrictions will result in financial penalties ranging from €100k to €1m, depending on the severity of the infraction and whether an operator has been previously penalized. Operators could also lose their license to operate in Spain for six-month periods or permanently if they demonstrate recidivism.