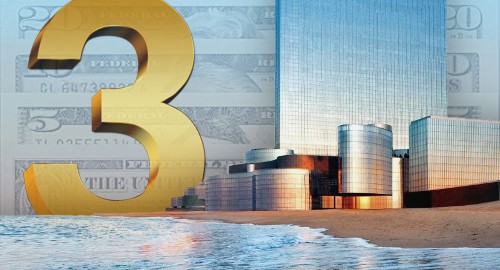 Atlantic City casinos reported a small decline in December’s slots and table revenue but still closed out 2019 with a respectable 7% annual rise.

The New Jersey Division of Gaming Enforcement announced Tuesday that the market’s nine casinos generated combined slots and table game revenue of $208.5m in December, a 0.2% fall from the same month last year and well below November’s $224m.

Full-year 2019 revenue was up 7% to $2.68b, with slots up 6.7% to $1.92b and tables rising 7.7% to $764.7m. This marks the third consecutive year in which AC’s brick-and-mortar revenue has posted an annual improvement, a welcome trend following the market’s decade-long decline that began following the high-water mark set in 2006.

The above figures don’t include the now significant contributions made by the market’s online gambling and sports betting operations. Total revenue generated by casino operators and their new online/betting partners came to $3.29b in 2019, a 15.1% improvement over 2018 and the first time since 2012 that the market’s revenue has topped the $3b mark.

But all seven casinos that were in operation prior to the Hard Rock and Ocean Casino’s mid-2018 launch reported annual declines in their slots and table revenue last year. Even when adding in the online/betting verticals, five of the seven were in negative growth mode last year.

AC’s casinos posted surprise quarterly profits in the third quarter of 2019, the first profit growth since the two newcomers opened their doors. But the profit figures were still down for the year to date and skeptics continue to doubt that AC is “a nine-casino market,” so perhaps keep the corks in the champagne bottles a little while longer.