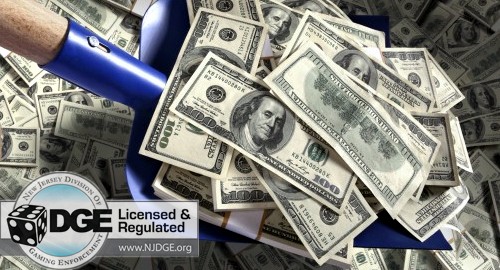 As ever, December’s gains were driven by the online casino vertical, which shot up by nearly three-quarters to $47.6m, while the online poker vertical fell 1.7% to $1.73m, which is nonetheless a damn sight better than November’s $1.49m, the current low-point for online poker in New Jersey.

December’s contribution brought the annual online gambling revenue total to $482.7m, a 61.6% improvement over 2018’s annual haul. Here again, online casino did all the heavy lifting, rising by two-thirds to $461.76m while online poker dipped 2.1% to $20.93m. On the plus side, poker’s annual decline was far worse in 2018, when it fell nearly 12% from 2017, suggesting a new floor of disinterest may have been established.

The Golden Nugget’s casino-only site maintained its rightful place atop the individual revenue rankings with $17.3m, up nearly 70% year-on-year but something of a disappointment given November’s record $18.9m total.

The Borgata family of sites – including BetMGM and PartyPoker – ranked third with $9.23m, of which $455k came via poker. The Borgata sites’ December haul was another record, beating November’s total by just over $1m.

The standings dropped off sharply from that point, with Caesars Interactive Entertainment New Jersey reporting a 0.6% year-on-year rise to $4.47m ($709k from poker), while the Tropicana’s casino-only site enjoyed a 27.8% rise to $4.07m.

The Hard Rock Atlantic City sites – which include Bet365 and the Kindred Group’s Unibet brand – were up two-thirds year-on-year but basically flat month-to-month at $2.2m, while Ocean Casino Resort brought up the rear with a mere $102,637, down nearly 80% year-on-year.

New Jersey’s struggling online poker market appeared in for a sorely needed boost after rumors circulated last week that GVC Holdings’ PartyPoker brand was planning something called the ‘PartyPoker US Network,’ which players took to mean GVC would be launching in Nevada, giving New Jersey players the opportunity to enjoy some hot interstate action.

Sadly, Adam Greenblatt, CEO of the Roar Digital online gambling joint venture between GVC and MGM Resorts, poured cold water on these hopes, saying cross-border poker liquidity was “not a short-term priority” for the JV, which is currently preoccupied with sports betting expansion.