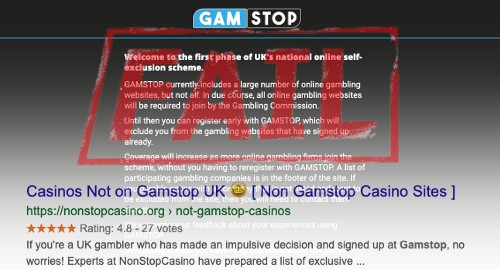 In some of these search results, the affiliates pitched readers on sites that weren’t part of the GamStop program. The affiliates justified this service by claiming that some gamblers may have “made an impulsive decision” to sign up for the self-exclusion program and might now be having second thoughts.

These sites offered UK gamblers ways to “bypass” GamStop and get back to the gambling action, with a somewhat pathetic caveat that gamblers should “promise us that you don’t have any addiction problems.”

The Betting and Gaming Council (BGC), the UK industry body that made its debut last year, responded to the tweet by insisting that UK-licensed operators “do not advertise using search terms linked to words seeking help.” The BGC said it would “raise this with relevant bodies and push search firms to strengthen their key word prohibitions.”

On Friday, the Independent reported that Google claimed to have suspended the offending accounts from its AdWords platform. But similar sites continue to appear in search results for GamStop, suggesting Google’s “strict policies” regarding gambling ads weren’t being enforced as rigorously as the company claims.

GamStop CEO Fiona Palmer said her group would be working with Google and other search engines to ensure future incidents of this type are minimized.

Last October, the UK Advertising Standards Authority (ASA) upheld a complaint against online casino operator Casumo after its site appeared in Google results when a user searched for “how to unsubscribe from all gambling” last May.

GamStop, which allows users to block access to all gambling sites in one go for periods of six months, one year or five years, was originally proposed in 2017 but its impact was muted due to patchy operator adoption. In 2019, the UK Gambling Commission (UKGC) announced that GamStop participation would henceforth be a condition of licensing.

News of the GamStop cockup came the same day as a Guardian newspaper report that the UKGC was mulling new restrictions on operators’ VIP programs after determining high-rollers were responsible for a disproportionately hefty share of account deposits and were more prone to problem gambling behavior.