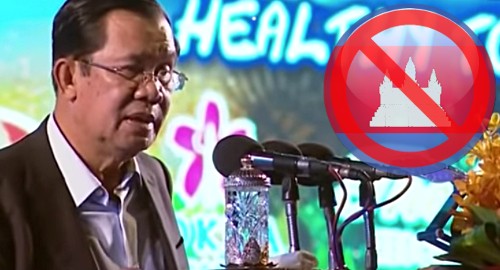 Cambodia’s online gambling ban will take effect as promised on January 1, 2020 after the country’s leader dashed hopes of any last minute reprieve.

On Saturday, Cambodia’s Prime Minister Hun Sen declared that “in days to come, online gambling will completely disappear.” The comments appear to extinguish any hope that the PM might reconsider the directive he issued in August that all existing online gambling licenses would expire at the end of 2019 and no new licenses would be issued.

The Phnom Penh Post quoted Hun Sen (pictured) telling attendees at the 8th Sea Festival in Kampot province that “if Cambodia’s economy continues to rely on online gambling, Cambodia’s national security will be compromised.” Hun Sen added that Cambodia risked becoming “a haven for money laundering” by “organized crime groups who will come to Cambodia to carry out their activities.”

Recent years had seen Cambodia issue dozens of new casino licenses, which also allowed licensees the right to launch online gambling sites. Cambodia became the Asia-Pacific region’s second-largest online gambling hub, behind only the Philippines, with most of these sites targeting customers in mainland China.

In October, Cambodia’s finance minister warned that the demise of the local online gambling industry will take a toll on the government’s treasury. On Saturday, Hun Sen said the blow to the local economy would be short-lived and that ridding itself of gambling-related crime would incentivize international investors to develop big-ticket non-gaming projects in the country.

Hun Sen’s August directive was widely viewed as a response to China’s increasingly vocal efforts to prevent gambling sites in neighboring countries from catering to mainland gamblers. In recognition of Cambodia’s ban, China agreed to “special discussions on grants to support development” of non-gaming projects in the Sihanoukville region, where many China-facing gambling sites were based.

Cambodian authorities have yet to reveal how they plan to handle enforcement of the new ban, but it’s not hard to believe that this is another area in which China would be all too willing to lend a helping hand. Chinese state-run media has been urging its regional neighbors to join forces to stamp out unauthorized online gambling “for the long term benefits of local economies.”