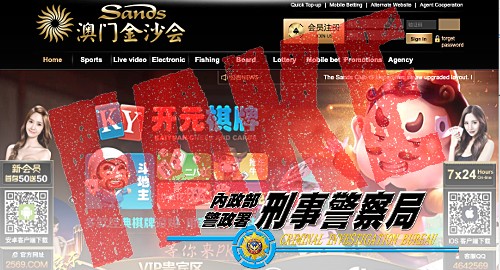 On Wednesday, the telecom division of Taiwan’s Criminal Investigation Bureau (CIB) announced the arrest of 29 individuals suspected of involvement in an illegal online gambling operation that catered primarily to customers in mainland China and other Asia-Pacific markets.

Acting on a tip, police raided an office complex in Taichung City where they discovered a major online gambling software design and technical support service. Police seized 57 computers, 102 monitors, 12 mobile phones, a number of bank cards and the equivalent of around US$20k in various currencies.

One of those arrested was an individual named Chen Nan, whom the CIB fingered as the mastermind of the gambling operation. Chen is said to have designed and managed over 30 gambling sites, which collectively handled a significant volume of wagers over the years.

Taiwan has a growing reputation as a tech support hub for China-facing online gambling operations. In September, the CIB disrupted what they described as a “one-stop industrial chain” for several large online gambling sites that reportedly handled a combined annual turnover of $700m.

The CIB’s handouts to local media showed examples of some of the sites to which Chen’s outfit provided support. One of these images shows a numbered-domain website displaying the logo of Las Vegas Sands’ Sands Macao casino – and somewhat cheekily features a ‘Copyright © Macau Sands Club Reserved’ slug – while also (bizarrely) showing images of Galaxy Entertainment Group’s Galaxy Macau casino.

The site in question claims to be licensed in the Philippines and assisted by white label technology provider BBIN, which powers hundreds of Asian-facing websites. But the Philippine Amusement and Gaming Corporation ordered its online licensees to steer clear of BBIN a few years ago.

This brand-poaching can have serious blowback for the actual owners. In January, Sands was forced to deny that its non-gambling Sands Resorts Macao app was among thousands of apps banned by Chinese cybercops for causing ‘great social harm.’ The app that was actually banned used the Chinese characters for Sands Macao.