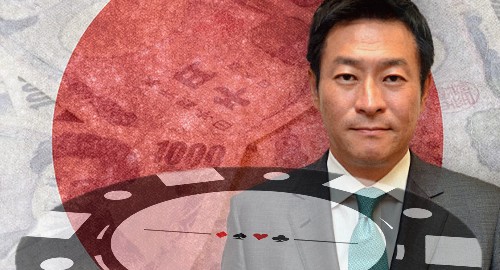 Chinese sports lottery operator 500.com appears to have got itself embroiled in a Japanese political scandal involving illegal money transfers.

Earlier this month, Japanese media reported that police had raided the homes of two former aides to Tsukasa Akimoto, a member of the ruling Liberal Democratic Party (LDP). The aides are suspected of bringing large amounts of cash into the country without declaring the currency to customs officials.

Until this September, Akimoto (pictured) was the head of Japan’s Ministry of Land, Infrastructure, Transport and Tourism, making him a key figure in Japan’s efforts to develop a homegrown casino industry. Akimoto has denied any knowledge of his former aides’ activities.

On Tuesday, Japanese media reported that police had also raided the offices of a Chinese company linked to a bid to develop an integrated resort casino in Hokkaido. The company is said to have formed in 2001, listed on New York’s Nasdaq exchange in 2013, is involved in China’s online sports lottery sector and had hoped to build a casino in Hokkaido’s Rusutsu region.

While the Chinese company has gone unnamed in Japanese media reports, Shenzhen-based 500.com matches the listed criteria, including having teamed up with a local firm on a Hokkaido casino bid. Earlier this month, Hokkaido Gov. Naomichi Suzuki confirmed that his prefecture was no longer interested in hosting one of the three integrated resorts the Japanese government plans to authorize.

The Tokyo District Public Prosecutors Office is reportedly probing whether the money suspected of being illegally brought into Japan by Akimoto’s aides belonged to the Chinese gaming firm. Bringing in undeclared cash over ¥1m (US$9,130) is a violation of Japan’s Foreign Exchange Act.

500.com has been struggling financially since early 2015, when China suspended all online lottery sales after uncovering rampant fraud by provincial lottery administrators. 500.com has attempted to diversify its revenue generation by signing land-based lottery contracts and acquiring European-facing online casino operations but the company has no history of running any land-based casino business.