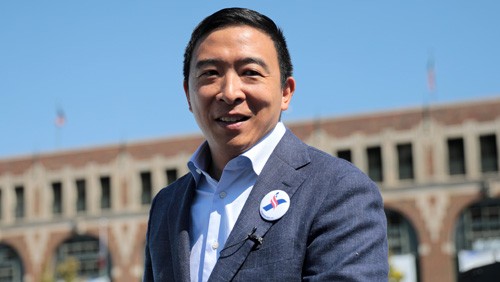 Gambling is pretty easy to identify when you spot it, and that makes the jobs of gambling regulators pretty easy. Unfortunately, games developers and publishers have muddied the waters with loot boxes, claiming they aren’t gambling but something else. U.S. Democratic Presidential Candidate Andrew Yang isn’t having any of it.

In a recent policy paper published to his campaign website titled “Regulating Technology Firms in the 21st Century,” Yang talks about the need for U.S. policy makers to upgrade their understanding of new technology, and writer better laws to address emerging problems that come from them.

He took the care to specifically address the scourge of lot boxes. “Loot boxes are impacting our children, causing them to spend more time and money on these video games, without many parents being aware of their existence,” he wrote. In contradiction to the U.K’s Minister of Parliament who once said loot boxes weren’t gambling, Yang insists the resemblance is uncanny:

“These mechanisms can seem similar to gambling because of the random outcome, keeping players (usually kids) engaged on the platform for longer or costing them hundreds or thousands of dollars in addition to the base cost of the game. Some games have a “free-to-play” model, where the game itself is free but they’re funded by the purchase of these loot boxes.”

To address the problem, he suggests that first, the government should revive the Office of Technology Assessment, which was killed off in the 1990s, and establish a Department of Technology, to help advise policy makers and regulate the industry. He then specifically calls for regulation of loot boxes, with specific limits on over-purchasing and increased transparency.

He also wants to somehow police free-to-play games to ensure they don’t exploit the psychology of children to push loot boxes sales, and require adult approved purchases. Laudable goals, but it will be interesting to see how these policies are implemented.

If you’re unsure if loot boxes are gambling, there may be no better expert on the matter than games journalist Jim Sterling, who’s been railing against the predatory nature of loot boxes for years.