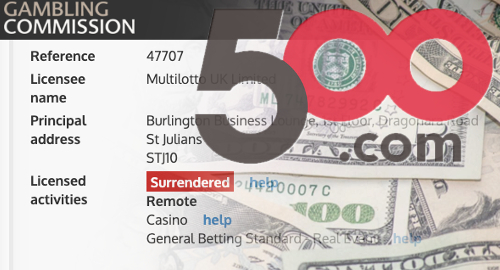 500.com has been struggling ever since the spring of 2015, when China ordered a halt to all online lottery sales after uncovering massive corruption amongst provincial lottery administrators. 500.com was one of only two companies that was formally authorized by Beijing to conduct online sales, although the reality was that multiple companies were offering online lottery products.

TMG accounted for nearly 95% of 500.com’s Q3 revenue but this figure could take a hit in coming quarters. Earlier this month, Multilotto informed its affiliates that it was closing down its Malta-licensed casino operations on November 18 but Multilotto’s casino and lotto products will “remain available for the Swedish market.”

Multilotto’s UK subsidiary has also surrendered its UK Gambling Commission (UKGC) online license, with its UK-facing site displaying a message that it would “temporarily suspend our casino activity” as of September 30. However, the UK site’s lottery betting operations appear to be still active and the site continues to display its UKGC logo.

500.com CEO Zhengming Pan said the company would continue to “engage in new and promising initiatives to increase our revenue base,” but some of these longshots better start paying off soon. The company’s share price currently sits around $9.72, down one-third from its 2019 peak and down over 80% from its 2014 peak of $49.50, while its cash reserves have fallen by around one-quarter since the end of June.