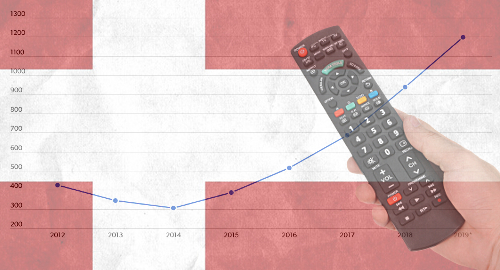 Denmark’s online gambling operators have dramatically ramped up their advertising presence in recent years despite efforts to impose voluntary curbs on marketing activity.

On Thursday, Danish media reported that a new study by market researchers Kantar Gallup shows the average number of gambling ads on local radio and television was 1,197 through the first eight months of 2019. The daily average in 2018 was 937 while the figure for 2012 – the year Denmark launched its regulated online gambling market – was only 426.

The volume of gambling ads bottomed out at just over 300 per day in 2014 before steadily climbing to its present rate. This has led to calls for restrictions on the industry’s ability to promote its products, including suggestions for mimicking the UK’s ‘whistle-to-whistle’ ban on gambling advertising during live sports events.

This spring, the Danish Online Gambling Association (DOGA), whose members include most of the country’s major licensees, announced plans to team with the country’s land-based gaming industry on a new voluntary code to achieve a “marked reduction” in the number of broadcast gambling promos.

This code would have featured the standard curbs, including blocks of time in which no gambling ads would be permitted and new restrictions on online and social media marketing. But implementation of this code was blocked in September by the Danish Competition Authority, which cited competition concerns.

DOGA CEO Morten Rønde said Thursday that his group’s members hadn’t given up on their self-regulatory proposals, and Rønde reiterated the group’s view that a total advertising ban would only lead to growth in the exposure of international online operators not holding a Danish license.

Denmark’s regulated online gambling market has been highly successful in ‘channeling’ gamblers away from unauthorized sites and is widely celebrated as a model for other jurisdictions considering either legalizing online gambling for the first time or transitioning from a monopoly regime.

Denmark offers a self-exclusion program (Rofus) for problem gamblers and recently introduced the StopSpillet (StopGambling) help line. This line has received more than 500 calls since its introduction in January 1, of which 39% came from relatives of problem gamblers.