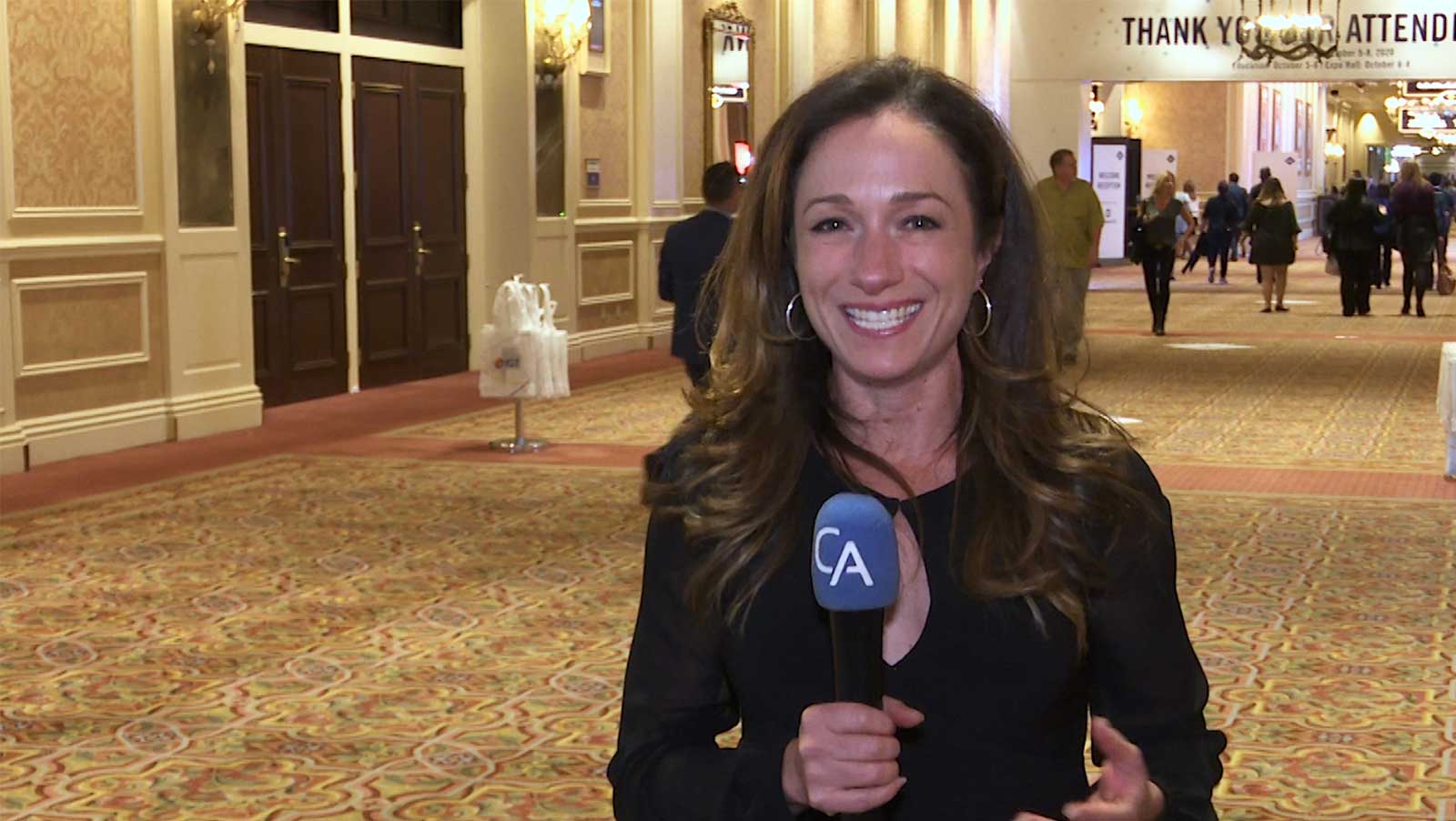 G2E Vegas 2019 is now in full force, with the grand expo floor’s opening this morning, drawing approximately 30,000 delegates to the Sands Expo from around the globe.

Over 500 exhibitors awaited the hungry crowds, all anxious to enjoy the latest product releases, partnership announcements, celeb appearances and inevitable encounters with familiar faces from the past. The excitement all across the expo floor today was contagious.

The Tuesday of G2E is notorious for celeb appearances so we knew we were in for a treat, our first encounter with “Jeopardy James” at the IGT booth. Amongst the sea of slot machines in IGT’s massive space we spotted their massive Jeopardy-branded video slot, a new release to be promoted at G2E by Jeopardy James’s presence.

“We’re here with our launch of our Jeopardy game on our IGT Mega Tower cabinets. These 11 foot tall cabinets are a big hit with players, we started out with the Wheel of Fortune franchise and are now expanding to more gameshows”, Phil O’Shaughnessy, IGT’s VP of Global Communications, Trade Shows and CSR told CalvinAyre.com.

“Jeopardy James, he had an amazing run on the Jeopardy show and he happens to live in Las Vegas, so it was the perfect opportunity for us to have him here in our booth at G2E and he’ll challenge, who ever dares, in definitely some pretty tough questions. I took a sneak peak, I saw some of the questions back there, and I wish anyone luck in beating Jeopardy James!”, O’Shaughnessy revealed.

Our friends at Bluberi Gaming, the creators of the “I Like Big Bucks” slot featuring Sir Mix-A-Lot, promised an announcement and special celebrity appearance this year at G2E and they did not disappoint. Their big reveal was a partnership with WWE, topped off by the presence of Professional Wrestler Becky “The Man” Lynch and WWE Legend Steve “Sting” Borden, both who were full of energy and happy to engage with the crowd.

“What we’ve done is we’ve built a relationship and a partnership with the WWE. We think that that brand, 9 hundred million followers around the world, 60 million a month, just observing and engaging, and we think that that’s a great formula for a game”, Mike Starzynski, Bluberi Gaming’s CEO, shared with CalvinAyre.com.

“I think that’s the key thing. WWE, on a casino, machine, playing, to the nth degree. I mean that’s really exciting”, he said.

The glowing Starzynski went on to explain how over the next year Bluberi will be working closely with WWE to actually develop the bespoke slots games, a level of engagement that goes far beyond simply owning the rights to use the brand name in a game.

Aristocrat’s presence at G2E continues to impress, with a huge booth space as always but this year with a special treat which could possibly be the most innovative slot design at the expo this year.
Born from Aristocrat’s “thinkBIGGER” program, the “Hyper Arc” slot concept was developed by two employees who kept persevering after going through twelve rounds of “no’s” from management. In the true spirit of innovating, the founding team found a way move from idea to reality and with the support of Aristocrat’s Joe Kaminkow, known as “the father of slots”, their creativity was brought to life in just two months.

“Its an idea we’ve been toying with for a while. They built a prototype quickly, sort of a garage shop type thing and it was fantastic and we had to bring it to the show. And we have to bring it to the casino floor”, Kaminkow shared with CalvinAyre.com.

“There is so much of the same, big displays, big flat displays- [Hyper Arc] doesn’t take up more floor space, it creates wonderment and its interactivity between all the games and its something special. So we’re trying to make something special that you can’t play on your cell phone”, he said with a smile.

IMG Arena, provider of world-class sports content and official data rights, announced their partnership with UFC, marking the UFC’s first ever official live betting product. We caught up with IMG Arena’s CEO, Freddie Longe, to find out why this partnership is such big news for the sports betting industry.

“We’ve created with the UFC a new data feed that is going to be collected Octagon-side so it meets the requirements of the industry in terms of speed and accuracy. And because its official from the UFC, it means new betting markets can be opened up as a consequence”, Longe told CalvinAyre.com.

“Its quite a subjective sport, so the fact that it comes with the UFC’s official stamp is a key part of its future success so that sports books can create and settle markets as a consequence of knowing that what they are being told is factually accurate, based on what the UFC have said”, he added.

The man responsible for US sports gambling gives some insight at G2E
Erik Gibbs
16 October 2019
.