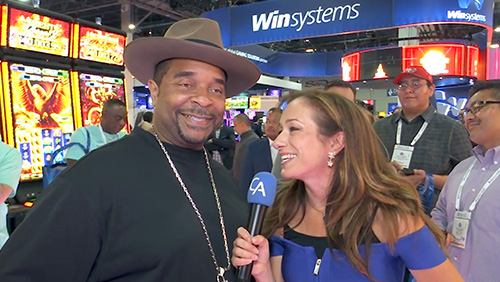 CalvinAyre.com’s Becky Liggero spoke to rapper Sir Mix-a-Lot on the new slot machine game inspired by his anthem from the 1990s.

‘I like big BUCK$’ is the branding given to Bluberi Gaming Canada Inc.’s slot machine game set for release in March 2019, in which rapper and record producer Sir Mix-a-Lot provides his likeness as well as sound samples derived from his hit ‘Baby Got Back,’ with slight variations.

He’s had a diverse career, crossing over from rap, to doing collaborations in other genres, as well as starring in TV and film. yet this particular venture is something new for the 55-year-old.

At the G2E 2018 conference in Las Vegas, he described the work involved as being “a lot, and we’re not done. We’re still adding stuff.” Recording for a game, according to Sir Mix-a-Lot, was quite different from recording at a studio. He said, “The music stuff was very interesting because I had to record it to fit the game as opposed to just doing a song, so I had to move the lyrics around, give them a capellas, give them music by itself, scratching by itself, all that stuff, and it worked. And like I said, this is just the start.”

Sir Mix-a-Lot then oh-so gently suggested for casino operators to purchase the game for their facilities. “If the casinos do not put this slot machine on the floor, they might mysteriously burn to the ground. I’ve seen it happen before, so I would suggest you get at least eight, and you’ll be safe,” he cracked.

The rapper’s participation in the game’s development is the latest in a growing trend of celebrities putting their faces on gambling or gaming products or participating in industry events, which points to a higher level of acceptability of the sector.

In 2016, rapper Soulja Boy had boasted of his endorsement deal with World Poker Fund Holdings, saying it was worth $400 million. Although the amount has been disputed, it does show how gaming has been embraced by the world outside gaming.

During the G2E 2017 conference, keynote speaker Magic Johnson, now president of basketball operations for the Los Angeles Lakers, pointed out how major sports leagues had never been more open to partnerships with casinos and sportsbooks. And this was prior to the U.S. Supreme Court’s decision lifting the federal ban on sports betting.