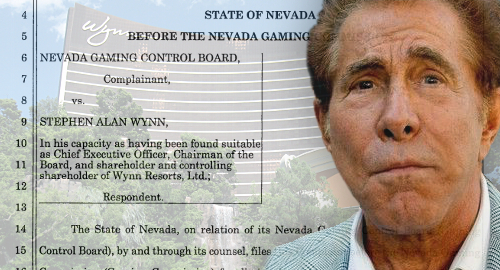 On Monday, the Nevada Gaming Control Board (NGCB) filed a complaint with the Nevada Gaming Commission (NGC) against Steve Wynn, who served as CEO and chairman of casino operator Wynn Resorts until his forced resignation in February 2018 following a string of sexual harassment allegations filed by the company’s female staff.

The NGCB claims that Steve is “unsuitable” to retain his gaming license due to his having “repeatedly violated Nevada’s gaming statutes and regulations, bringing discredit upon the state of Nevada and its gaming industry.”

The complaint, which is based on five counts of violating state gaming rules, notes that Steve failed to report the allegations against him, kept some complaints out of the public eye through “nondisclosure agreements and various other means,” and “serially disregarded” his own company’s policies and procedures.

Steve also failed to appear before the NGCB when it sought his testimony regarding the allegations, despite his being warned that a failure to appear would constitute grounds for the revocation of his Findings of Suitability.

In addition to revoking Steve’s license, the NGCB also wants the NGC to impose a financial penalty on Steve for each of the violations charged against him in the complaint.

This February, the Nevada Gaming Commission issued its largest-ever fine of $20m against Wynn Resorts for failing to properly investigate the multiple allegations made against Steve. In May, Massachusetts regulators fined the company $35m plus an additional $500k penalty on current Wynn CEO Matt Maddox for his role in keeping Steve’s shenanigans under wraps.

In September, a class action suit was filed in Nevada against Wynn Resorts by nine women who claim to have been victims of Steve’s harassment.