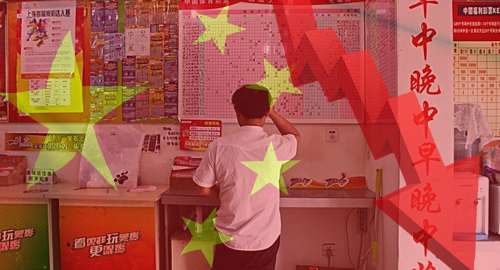 China’s state-run lottery sales suffered another decline in August but an even greater decline looms as the government shuts down its lottery operations for a week.

Figures released by China’s Ministry of Finance showed total lottery sales of RMB34.1b (US$4.77b) in the month of August, an 18.5% decline from the same month last year. For the year-to-date, lottery sales have fallen 18.2% to RMB279.4b.

While China’s lottery sales have been in the red all year, the pace of the decline accelerated rapidly during the summer months, primarily due to the previous summer’s sales boost due to the FIFA World Cup football tournament, which generated record gains for the dominant sports lottery segment.

But October’s sales are expected to produce an even greater decline due to the government’s decision to temporarily suspend all lottery operations in order to respect the October 1 National Day celebrations. The Ministry of Finance says all lottery sales, along with lottery support services, will be halted at 12:01am on October 1 and won’t resume until 12:01am on October 8.

Certain sports lottery products – the football and basketball ‘single-quiz games’ – were ordered to shut down until October 8th but at least some of the individual provincial lottery administration centers are reporting that the “open sports lottery will be sold normally.”

China’s lottery products are the only form of gambling that mainland Chinese are allowed to enjoy, and they haven’t been able to access online lottery products since March 2015 after a government probe exposed massive corruption by some lottery administration officials.