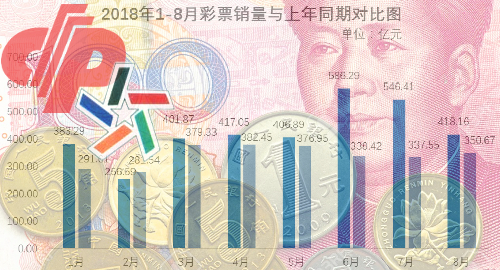 China’s sports lottery suffered no World Cup hangover in August, as sales maintained the explosive growth the sector has enjoyed this year.

On Thursday, China’s Ministry of Finance announced that overall lottery sales in the month of August had exceeded RMB41.8b (US$6.07b), up 19.2% from the same month last year, and a new monthly sales record for a non-World Cup month. For the year-to-date, total lottery sales are up nearly one-quarter to RMB341.6b ($49.6b).

The sports lottery’s remarkable growth is all the more remarkable given that August was well past the conclusion of the 2018 FIFA World Cup, which saw sports lottery sales more than double year-on-year in June and July.

The gains are also notable for the fact that China has held fast on its prohibition of online lottery sales, despite the obvious appetite Chinese lottery players had for the digital options that were shut down in March 2015. But Beijing appears to be sticking to its guns, in part due to its inability to rein in corruption at provincial lottery administration centers.

Despite the impressive sales figures, Beijing doesn’t appear content to rest on its laurels. Earlier this month, the government awarded a new sports lottery integrated marketing contract to Mindshare Beijing, the first time China has issued such a contract to a multinational 4A (American Association of Advertising Agencies) member.

Campaign Asia reported that the contract, which is set to run from 2019 through 2021, was won with a bid of RMB3.6m (US$524k). Mindshare Beijing issued a statement celebrating the fact that it beat out three rivals for the contract and declaring that its mission was to integrate “brand strategy, communication strategy and media strategy” to spur the sports lottery business to new heights.