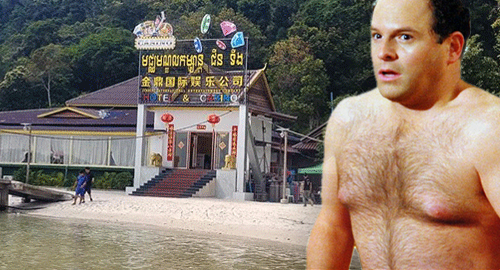 Cambodia’s once-thriving casino industry is undergoing all sorts of changes, some of it spurred by the government’s recent decision to rein in its online gambling market.

The notorious casino (pictured) was ordered to close in March after local residents repeatedly complained about the casino pumping raw sewage into the sea, amongst other infractions. But the casino’s Chinese owner, who had been operating without a license for over a year, simply ignored the order and it took local officials until late-May to shut the joint down.

Officials assured local residents that the offending building would be torn down in order to restore their once pristine beach to its former glories. But the government hasn’t taken any steps toward this goal since the casino was shut down, prompting local environmental group Mother Nature to file a petition urging local officials to get on with the job.

Mother Nature leader Long Kunthea said suspicions were mounting that officials plan to eventually reopen the casino at some future date. Local officials dismissed the idea, pointing out that the casino’s closure means there is no urgency to proceed with the demolition and the public just had to be patient with the slow pace of bureaucracy.

As recently as one month ago, Sihanoukville was home to dozens of casinos, most of which were run by Chinese nationals. But since the Cambodian government announced a moratorium on its online gambling licensing regime, many of these Chinese nationals have upped sticks and returned home (although the true number of those who’ve left remains a matter of some debate).

Local residents who worked in some of these Chinese-run casinos have also seen their lives upended. Sihanoukville’s Baomai Resort & Casino suspended its operations on September 1 and around 300 staff reported that the Chinese owner failed to pay their final month’s wages.

The provincial Department of Labor attempted to intervene on the workers’ behalf, only to be told that the owner didn’t have the money to pay his staff. The owner later agreed to pay the workers on September 23 but local media has yet to indicate whether this promise was honored, nor what the authorities’ options were if the owner couldn’t honor his debts.

Mississippi casinos are back in action, but COVID-19 lingers
Erik Gibbs
8 hours Ago

US casinos enjoyed record revenue of $43.6b in 2019’s pre-pandemic paradise
Steven Stradbrooke
15 hours Ago