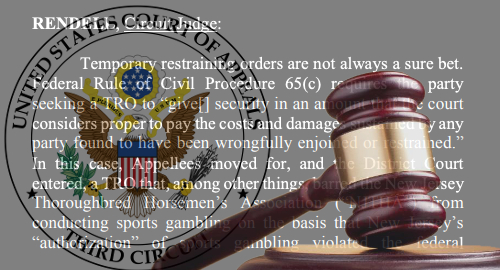 New Jersey’s thoroughbred racing industry has won a significant legal victory over the US sports leagues that blocked the state’s pursuit of legal sports betting.

On Tuesday, a three-judge panel of the US Third Circuit Court of Appeals voted 2-1 in favor of the New Jersey Thoroughbred Horsemen’s Association’s (NJTHA) appeal of a US District Court ruling barring them from collecting financial damages from the sports leagues that blocked New Jersey’s quest for legal wagering.

The NJTHA, which operates the state’s Monmouth Park racetrack, filed suit against the National Football League, the National Basketball Association, the National Hockey League, Major League Baseball and the National Collegiate Athletics Association after the US Supreme Court overturned the federal sports betting prohibition in May 2018.

The NJTHA argued that the leagues’ multi-year obstructionism against New Jersey’s pursuit of legal betting had robbed the track of as much as $150m in lost wagering revenue. In the first 15 months since the Supremes struck down the federal ban, Monmouth Park has generated sports betting revenue of $28m.

In 2014, US District Court Judge Michael Shipp granted the leagues a temporary restraining order that froze New Jersey’s betting plans. But the NJTHA sought and was granted an injunction that required the leagues to post a $3.4m bond in case the state ultimately emerged triumphant at the nation’s top court.

The NJTHA was originally denied any claim on that $3.4m but the NJTHA filed an appeal of that US District Court ruling with the Third Circuit, leading to Tuesday’s favorable ruling that the NJTHA was “wrongfully enjoined” by the restraining order.

However, while the Third Circuit panel said the NJTHA was “entitled to recover provable damages up to the bond amount,” the NJTHA will now have to go back to District Court to determine how much of that $3.4m it can collect, as well as whether or not any further damages are owed.

Dennis Drazin, CEO of Darby Development, the entity that operates Monmouth on behalf of the NJTHA, said Tuesday’s ruling was “all positive” for his group. Drazin said the track “will eventually collect some damages” and was looking forward to making the track’s case at the District Court.

The irony here is heavy, given that the pro leagues have been largely unsuccessful in convincing state legislators to include ‘integrity fees’ in betting legislation and/or requiring the use of league-supplied data for betting purposes. Perhaps they should be spending their money on legal fees, not lobbying costs.