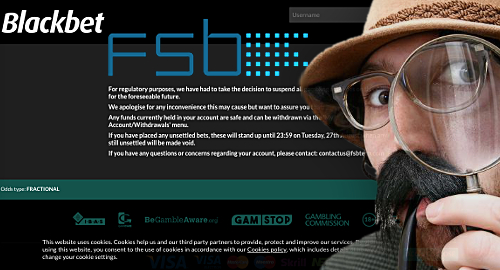 Online gambling technology provider FSB Technology says it’s cooperating fully with UK regulators regarding the activities of some of its white label partners.

Late last week, the UK Gambling Commission (UKGC) announced that it was conducting a review of the London-based FSB’s gaming license under section 116 of the Gambling Act (2005), which allows the UKGC to review the operations of any licensee the regulator suspects of being unsuitable to carry on the activities permitted under its license.

Announcement of the probe coincided with the suspension of the UK-facing site of FSB’s white label partner Blackbet. The Blackbet.co.uk domain currently features a notice of its suspension while assuring customers that their deposits could be withdrawn and pending wagers would be honored until Tuesday (27).

FSB has since issued a statement saying the UKGC had “recently expressed concerns over the levels of due diligence performed on a small number of our white label partners.” FSB said both it and its affected partners were “fully cooperating with the UKGC and we anticipate comprehensive resolution of those concerns in short order.”

FSB insisted that the regulatory probe was “isolated to a nominal amount of white label licenses only, and no further impact or site-suspension is expected.” eGaming Review magazine suggested last week that FSB’s Quinnbet partner site was likely to follow Blackbet into the dark, but the site remains fully operational as of Tuesday.

News of the Blackbet probe came one week after another FSB partner site, the UK-facing operation of Cyprus-based 1xBet, shut down following a Sunday Times report of multiple regulatory no-nos. The UKGC reportedly launched a separate probe into 1xBet’s activities, although the regulator has yet to publicly comment on the status of this probe.

FSB maintains that it “puts probity at the cornerstone of everything we do” and takes “our social and regulatory responsibilities to our customers and the wider public extremely seriously.” FSB offered assurances that it would “continue to act in good and transparent faith with the UKGC to protect all customer interests and funds.”