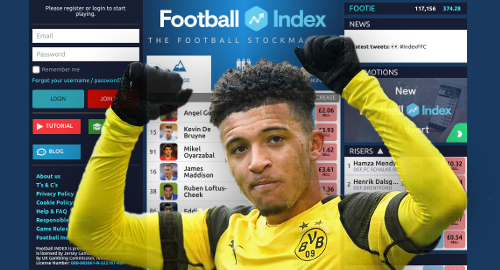 The Football Index is the latest gambling operator to have had the the finger of scorn pointed at it by the UK’s advertising watchdog.

On Wednesday, the UK’s Advertising Standards Authority (ASA) upheld a complaint filed against BetIndex Ltd, parent company of the Football Index, a gambling platform that acts like a stock exchange, allowing customers to wager by ‘trading’ on individual athletes’ on-field performances and media mentions.

The advert in question was a paid-for Facebook promo that listed the Index value of five football players, including 19-year-old Borussia Dortmund midfielder Jadon Sancho. Text accompanying the ad called Sancho ‘The Big Mover’ and claimed that many traders were “seeing handsome profits” by backing Sancho.

The complainant felt the ad violated the Committee of Advertising Practice (CAP) code, which prohibits anyone who is either under 25 years of age or appears under-25 from playing a “significant role” in gambling promos. Youthful models must also not appear in a gambling context. These rules don’t apply to ads that appear in situations in which the viewer is in a position to actually place a bet, such as after logging on to a betting site.

While BetIndex voluntarily withdrew the ad and promised to further educate staff on acceptable ad practices, they also argued that none of the athletes depicted were drawn out for specific focus and thus didn’t play a ‘significant’ role in the ad. The athletes were used simply to illustrate how the platform functioned and no athlete was depicted gambling.

The ASA said it recognized the ad was intended to illustrate the Index’s functionality but “considered that of equal measure was its aim to offer the audience an opportunity to use the app for the purposes of gambling.” The ASA also determined that “all listed footballers were the focus of the post, and that each of them played an equally significant role” in the ad.

This isn’t the first time that the ASA has spanked a gambling operator for violating its ‘barely legal’ rules. In 2015, three operators – Bet365, Coral and Totesport – were all found guilty of using images of whisker-free golfer Jordan Spieth that apparently aroused the Lolita-like urges of several social media mavens.