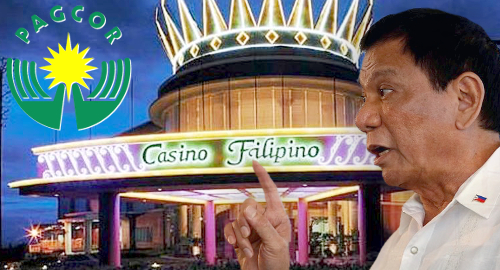 The Philippines gambling regulator is pushing back against reports that its Manila Bay casino operation is a money pit, while the country’s mercurial president wants the regulator to do more to boost its gambling revenue.

On Tuesday, the state-run Philippine Amusement and Gaming Corporation (PAGCOR) refuted the recent report by the government’s Commission on Audit (COA) detailing the P2.11b (US$41.2m) in losses allegedly incurred by the PAGCOR-run Casino Filipino (CF) Manila Bay over the past five years.

In a statement, PAGCOR claimed that the COA report included losses reported by CF Pavilion, a separate and now defunct entity that ran the casino until August 2017, when CF Manila Bay took over. Roughly P1.4b of the P2.1b losses booked since 2014 happened on CF Pavilion’s watch.

Furthermore, PAGCOR claimed that the Manila Bay property was actually turning a profit if you discount the mandated contributions to government coffers, national sports bodies, payments to the host community and the 5% franchise tax collected by the Bureau of Internal Revenue. The combined tally of these contributions since 2017 is over P875m.

Meanwhile, the stellar overall revenue figures that PAGCOR has reported this year haven’t gone unnoticed by the country’s President Rodrigo Duterte. On Monday, Duterte used his State of the Nation address to praise PAGCOR’s contributions to the country’s budget so far this year, which ranked highest among all government owned and controlled corporations at P16.2b.

Duterte’s sudden fondness for gambling revenue stands in stark contrast to virtually everything he’s publicly said on the subject since he took office in mid-2016. Duterte has reserved particular scorn for local online gambling operators, but that was before the government realized the lucrative benefits of imposing withholding taxes on its online licensees’ Chinese workforce.

Then again, Duterte’s address also saw him consider banning public karaoke singing after 9 p.m. and complaints that alcohol and tobacco “should be exterminated from the face of the earth,” apparently because he’s suffered personal health issues as a result of the two vices. Duterte also said he’d be willing to face being imprisoned by the International Criminal Court over his deadly anti-drug campaign if he was provided “unlimited conjugal visits.” So really, we’re none the wiser on his gambling stance.