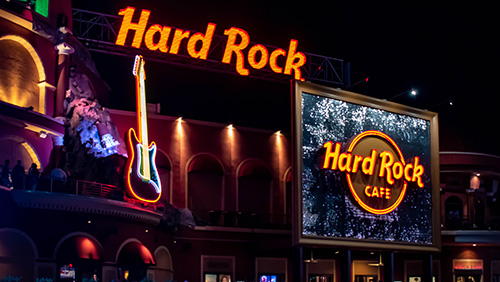 Hard Rock International is increasing its U.S.-based footprint. It has agreed to give franchise rights to Spectacle Entertainment that would lead to two Hard Rock-branded casinos coming to the newly expanding gambling market in Indiana. If everything goes well, Hard Rock’s iconic guitar will dot the landscapes of both Gary and Terre Haute.

Indiana lawmakers recently approved sports gambling and casino expansion through a bill that was supported by Indiana’s governor, Eric Holcomb. As a result, sportsbooks are starting to make an appearance and the local casino scene is being shuffled. A new Terre Haute casino was authorized and two riverboats operating out of Gary were approved to be combined into one property that would move onto dry land.

Both of those riverboats are owned by Spectacle and, according to company lawyer John Keeler, Spectacle and Hard Rock have already signed a letter of intent for the new branding deal. The Tribune-Star in Indiana adds that the partnership comes as a result of Indiana’s neighbor, Illinois, recently authorizing sports gambling and casino expansion. By bringing Hard Rock into the state, Indiana can be in a better position to compete against the six new casinos to be offered in Illinois.

Terre Haute is only about 60 miles away from Danville in Illinois, which could lead to the latter poaching gamblers out of Indiana if it isn’t careful. However, in order for Terre Haute to build the casino, local residents of Vigo County, where the city is located, have to sign off on the deal. The issue will be put to a vote in November.

Hard Rock isn’t putting all its eggs in one basket, though—it is also considering entering the market in Illinois. The company is considering a venue in Rockford that will be announced during an invitation-only event hosted by Hard Rock CEO Jim Allen and Cheap Trick guitarist Rick Nielsen tomorrow. That event is scheduled to be held at the former Clock Tower Resort in the city.

The casino reveal should provide details on the exact location of the new venue, as well as its design. It’s going to be a difficult sale to local residents, though, as Rockford Mayor Tom McNamara has already said that the city doesn’t endorse the property. This, despite the fact that it could create almost 1000 permanent jobs and bring up to $8 million in tax revenue to the city.