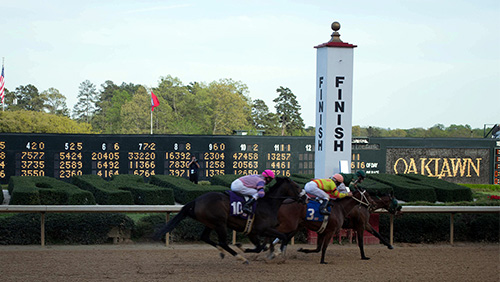 Arkansas only recently approved sports gambling after a somewhat contentious battle and the state has already begun to receive its first bets. This past Monday, the General Manager of the Oaklawn Racing Casino Resort, Wayne Smith, placed the first ceremonial bet in order to officially launch the activity and the Hot Springs venue is now ready for state gamblers to start placing their bets.

Two venues are eligible to offer sports gambling in Arkansas – Oaklawn and Southland Casino Racing in West Memphis. Both previously operated as just racetracks, but an amendment was approved by state residents last November that made changes to the constitution that allows them to offer casino-style games and a sportsbook. That same amendment also allows two other casinos to be built, one in Pope County and the other in Jefferson County.

Oaklawn is the first to offer a sportsbook, its newly remodeled Race & Sports Book. The venue was granted approval by the Arkansas Racing Commission last month to launch sports gambling as of July 1 and it was ready as soon as the clock reached the new day. Wagers can be placed on a variety of sports competitions, including the big leagues, the NCAA, the Olympics and more.

The sportsbook is being powered by SBTech, which has begun a plan to expand across the U.S. The European-based betting technology company is also reportedly in talks with DraftKings over the possibility of the latter acquiring it for an unknown sum.

Southland opened its new casino floor this past April. It is still working on the final touches of its sportsbook and hasn’t indicated when it expects to begin accepting wagers.

Whether or not Pope County receives a casino remains to be seen. According to the results of the vote last November, the majority of the residents of the county voted against the amendment, indicating that they’re not thrilled with the prospect of having a gambling house in their back yard. However, if something were to change, there’s already one person ready to start construction. Dallas Cowboys owner Jerry Jones, through his Legends company, has expressed interest in a Pope County casino.