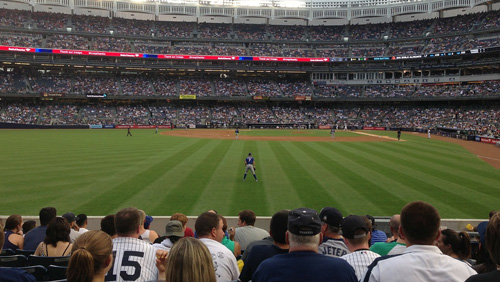 Online sports gambling could be coming to New York in the near future, but only to a few select venues if a newly resurrected and altered gambling bill is approved. It soon might be possible to find the owners of Madison Square Garden and Yankee Stadium participating in sports gambling, but not the owners of the Buffalo Bills and Buffalo Sabres, Terry and Kim Pegula.

Efforts to introduce sports gambling to New York have been ongoing for quite some time and there has been a little progress. According to The Buffalo News, the newly amended bill would pave the way for “affiliates” to provide sports gambling in addition to the state’s four approved commercial and its handful of Indian casinos.

An affiliate is defined as an off-track betting operation or racetrack, or “any professional sports stadium or arena in New York State,” according to the bill. However, those affiliate locations are not allowed to be located in any county that has a racetrack or off-track betting facility (OTB). The Buffalo News points out, “Erie County has both, meaning that Pegula Sports and Entertainment would be cut out of participating in an online sports betting arrangement with a casino.”

On the other hand, the Bronx, on the other hand, has neither a racetrack or an OTB, so Yankee Stadium would be allowed to participate. The same goes for Madison Square Garden, located in Manhattan. Citi Field in Queens, though, would be benched because Queens has the Aqueduct Racetrack, an affiliation by the bill’s definition.

Pegula Sports and Entertainment, which is behind several sports ventures including the Sabres and the Bills, doesn’t necessarily like the idea. It said in a statement, “This bill, as amended, would not provide the same advantages to Western New York sports fans that it would to the fans who attend professional sports events in other parts of the state… As we have said all along, we are absolutely committed to ensuring that our fans have the same in-venue experiences as all other fans across the state of New York.”

The changes to the legislative piece were made in an effort to move the legislative piece out of the mud, where it has been stuck for the past several weeks. The bill’s sponsors hope to appease opponents of the bill and try to find an acceptable common ground ahead of the termination of this year’s legislative session on June 19.